Why Self Publish?: A journey into masachism 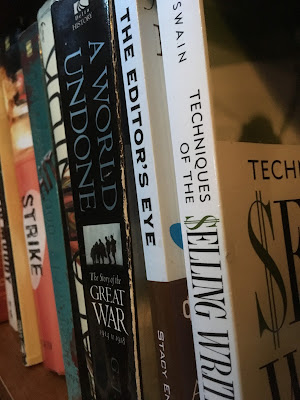 First a quick status update on the books in progress.

My editor is about halfway through with the first round of comments while I travel in her wake and try to fix the glaring errors she is nice enough to point out to me.

The third book is coming along nicely.  Right now I'm about a third of the way through the process of consolidating about ten various outlines and turning them into a spreadsheet where all the scenes from the book are listed and described.

Anyway, as I said in the first post, Saturnius Mons will be released upon the world as a self-published novel, the first in a series of three.  The decision was not an easy one and, in fact, I flip-flopped between traditional and self publishing right up until the manuscript was done.


When making a decision this huge, one often makes a list of 'pros' and 'cons', looks at it, tears it up, throws it in the garbage and does what he or she wanted to in the first place.  This is my list.

No personal financial risk: In the traditional system you send your book to a publisher who then puts up the money to have that steaming pile of writer refuse molded, sculpted and polished into a nice, beautiful book.  Editors, cover designers, lawyers, psychologists, fluffers... all of those are paid for by the good people putting out the book.

A crack team of professionals: In my mind's eye, I imaging my book rolling up like a old Studebaker and fifteen guys running out in a line with matching uniforms and hats to check the tires, check the oil, wash the windows give the driver a handy...  Bottom line they've got people.  Presumably good people or, failing that, at least people who've done this a time or two.

Access:  You wanna walk down your local bookstore shelves and see a pile of your books on display?  You wanna get all the international deals?  You want J.J. Abrams do drive a dump truck full of money to your house for the movie rights?  You're gonna need to go traditional.

Gatekeepers: Let's face it, there's something to be said for someone at the door to keep the riff raff out.  People still primarily consume books from traditional publishers because there's a reasonable assurance that the worst of the slush pile dumpster fire ain't gonna make the cut.


Gatekeepers: Of course that assumes that you're not part of the riff raft which, statistically speaking, you probably are.  And if you are not one of the chosen lucky few, you're SOL JWF.  Shit Out of Luck and Jolly Well Fucked.

Just because they can doesn't mean they do: Right now unless your name is J. K. Rowling or Steven King, most publishers could give a shit about you.  Wanna have a display at a book store?  How about we throw one copy of your book in a corner so deep only spiders will read it?  That's basically the same right?

They take their cut: You remember that crack team I talked about earlier?  Yeah, they all gots to get paid.  They put up the initial investment, and they gonna take the majority of the profits.  That's how the world works, shitbird.  Meanwhile you get a dollar bill shoved in your g-string and a pat on the cheek.

Slow as Balls: Traditional publishing moves at a pace that can only be measured in geological scales. If you finished your book when your child was a baby, she could be old enough to point out your plot holes by the time it sees shelves.

Dying A Slow, Miserable Death: Publishing has never been the most profitable gig.  But these days the owners of publishing houses find themselves staring wistfully at the hobo begging on the corner.  Traditional publishing is shitting the bed.  Which means taking a bet on a new author is a rough gamble.  Which brings me to one final point...

Catch 22, Authors Edition: If you aren't already a name, most publishers don't want to have anything to do with you.  But how do you make a name for yourself if no one will publish your book.  HOW I ASK YOU!?!

This, of course, is the most attractive prospect of self publishing.  The idea of being free to put anything out in the world.  Wanna publish your centaur / alien hardcore erotica series?  Ain't nobody there to tell you that you can't.  There might be people that tell you that you shouldn't like friends and family and other well-wishers that don't wanna see you become the centaur sex dude, but they can't stop it.

You are the one and only god in the Universe that is your book.

Keep all the monies!: And the money at the end of the day.  It's yours! All yours!  Make a hat out of it!

We live in an age of miracles: Self publishing is easier than it has ever been in the history of putting words on paper.  A couple decades ago there was no way to reach an international audience without a traditional publishing house.  Now, with the wonders of the Internet, it costs literally nothing to put your work in a place where anybody can conceivably find it.  And it's getting easier all the time.


You spend all the monies.... and you're probably poor so...: So it turns out that if you get to keep All The Monies, nobody is going to pitch in some of theirs because.... well your keeping All the Monies!

So that means initial investment comes from in International Bank of The Broke-Ass Pantless Loser Who Wrote this Piece of Shit.  Namely you.  And if you're anything like me, that means that the funding is going to ultimately come down to how much cash you can scrape from betwixt the couch cushions.

I guess what I'm getting at is you're probably not going to afford an editor of three New York Times bestsellers and a cover designer who recently had a gallery opening in Paris.  So your gonna have to make the best with what you can find.

Anybody Can Do It: The democratization of publishing is a two-sided coin.  On one hand some amazing work is being put out there that may never have seen the light of day in the old system.  On the other hand there is literally a book that is nothing but the word 'fart' written 10,000 times.  Your little masterpiece is just another turd in the sewage pond.  And that pond runeth over.

Shouting Into the Void: Of course with literally hundreds of new books of all types coming out every day, getting noticed is a herculean task.  And you are the only carnival barker for your circus of horrors and you're trying to shout over an entire city of like-minded hopefuls.  By the way, there are thousands of books that are being marketed by teams of humans with actual money.  On top of that television, podcasts, angry white people on Fox and disturbing Internet pornography- all of it is competing for time and eyeballs.  Nevermind David and Goliath, this is David and the Fucking Sun.  Hope you have a big sling.

Amazon: Remember how I talked about total control?  Yeah, that's only sorta the case.  I'm not going to get into too much of it here because the complexity of this behemoth is staggering and worthy of several posts in and of itself.  Just know that if you want to play in Amazon's sandbox, you gotta play by their rules.  And Amazon's rules exist for one reason and one reason only; to benefit Amazon.  Wanna take your ball and go home?  Fine.

Have fun out there alone.  Cue crickets.

The sad fact is that if you are self-publishing, these days, you are not self publishing.  Amazon is your publisher and your publisher gives less than a rats dookie about you.  And if you don't like it, there is nowhere else to go.  At least nowhere that has nearly the customer base that Amazon does.  We can get into the wisdom of letting one company control the entire industry later (and we will believe me) but for now its enough to say, Amazon is thy god.  Thy god is Amazon.  Kneel before Zod.

So staring into this bleak landscape one has to make a choice.  This is mine.  I decided to hike up my big-boy pants, grab a flask of whiskey and go the self-publish route.  And the big reasons are these:

There will always be a need for traditional publishers, but their place in this new world we've created is, to put it mildly, uncertain.  While they sort their shit out, content creators are venturing off to claim a little piece of land for themselves.  It's a weird, wild, fun, interesting, scary world and I want in.

There are certain things I want from these books.  I want to know that, whatever the commercial success or failure of the first books of the series, all the books will see the light of day.  I want to be able to write and publish short stories that take place in the same world.  I want the ability to release it as a podcast and audio book.  Most of all I want to be sure I'm getting fair compensation for my work.  Contracts for new authors, when they are even given, are not often kind.   New authors are like hungry birds in the park to a publisher.  There are thousands of them, they all want everything and all the really do is make noise and shit all over everything.

Someday I probably will want to publish something via the traditional route and it would be nice to have some sort of proven history as a bargaining chip.

#3: One Doesn't Preclude the Other:

There was a time when publishers wouldn't touch a self-published book with a ten-foot clown pole.  It was kind of an 'us or them' mentality.  Especially if any part of the book was ever given away free.  The reasoning was that, if it was already out there and available for free, who would buy it?

But more and more I think publishers are waking up to the idea that there is money to be made in successful indie books.  The Martian, 50 Shades of Grey and Wool, are just a few of the more recent titles that started in the vast new medial landscape.  These are, of course, obvious outliers and the book equivalent of lottery winners, (though I suspect if you actually run the numbers, writing an indie book that becomes a best seller is a ton more likely than winning any state lottery) I believe it shows something changing deep in the heart of how we all get and consume stories.

So that's where I'm at.  Maybe I'm making a terrible mistake (It won't be my first) but it's worth a try.  And it seems better than sending my book to a hundred agents and two hundred publishers begging and pleading for the hint of the chance of a possibility of being able to tell the story I want to tell.