Holy Shit! All of the things are happening!

It's still something I cannot fully wrap my mind around.

The weird thing is that, even while the manuscript was in editing, it didn't feel like I was hurling toward a kind of finale.  And then, around the first of March, it all became immediately, suddenly and undeniably real.  And in the space of a month, this strange, twisted story that only existed in my mind, became a thing that was actually going to go out into the world.

And there was so much to do in order to make that happen.  More than that, so many amazing people have jumped in to help make this a reality.  I seriously don't know what I would be doing without these people.

Here are a few of the highlights.

First and foremost, I am so lucky to know so many amazingly talented and generous people.  Nick Martin, a Boise artist which some of you local cats who frequent HomeBrewStuff or some of the other beer slinging venues around town might have run into has been working hard on the cover.  And after some spectacular ideas is starting to cycle in on a very cool looking cover that will really make this project feel special.

I've never worked with a visual artist on a project like this, but he's been amazingly tolerant of the fact that I had almost no idea of what I wanted the cover to look like in the first place and, when the first designs started cascading in, of my nit-picky changes.

Leading up to this project, I received some, no doubt, very good council from fellow writer-types when I said that a friend of mine was going to help me with my cover.  They both got suddenly serious and said, in no uncertain terms, "Don't work with your friends."

Which, like I said, is probably very good advice.

But again, I am truly blessed to know people who just want to help me make this the best book it can possibly be. People who are willing to work with me until we have a kind of meeting of the minds.

So here's where we are at right now: 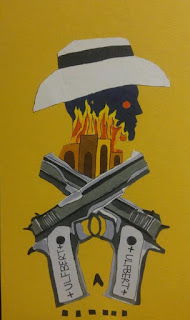 Obviously there are still some elements that need to be added, but this looks bad-ass.  I am so excited to see the final result.


And on a related note, Nick is having an art show next month at The Local in Boise.  I've seen his art, it is amazing, a bunch of it is going to be on display April 5th from 6-9 pm and you all should go.  Every single one of you.  Whether you are in Boise or not.  Whether you are in this country or not.  Even if you are on another planet, hit the hyperdrive, mo-fo and get down here.

Who would have known that performing an audio book is hard?  Like really really really hard?  Like my ass is numb, my eyes are crossing and the sounds coming out of my face don't even sound like words anymore.

Speaking of incredible people, my old friend Shaun Vincent has crawled out of his own little spider hole and is lending his expertise in the world of podcasting. 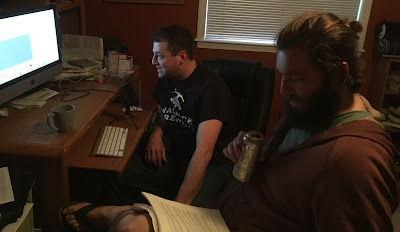 It basically works like this:  I try to read out loud and Shaun hits me with a stick and tells me to do it better.  I keep on doing it until I do it good enough.  Or he breaks the stick.  He's gone through several sticks.

But we've managed to work through it and now three episodes are in the can with another on its way very soon.  I'm hoping for a launch this Sunday so stay tuned for the link and you can start listening to the book before it even appears on the page anywhere.

The manuscript, such as it is, is set to be uploaded tomorrow.  A temporary cover is uploaded until Nick can finish his magic is up.  A semi-completed e-book has been uploaded waiting for my editor to finish cleaning up my mistakes.  Lights.  Camera.  Action, Bitches!

And, on the editing, Madison Hansen has been working hard on this for the better part of seven months.  And again, I wasn't sure what this experience was going to be like although it's been really good.  She's been helping me tighten up the sections that need it, pave over some of my more gaping plot holes and putting some orange cones around the sections where I completely go off the rails.

So that's it.  It's all happening.

Buy the ticket.  Take the ride.