What Do You Say To An Alien? 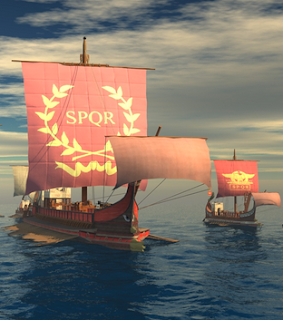 Imagine it's a foggy morning on the misty island of Britannia around 1000 AD.  A monk walks the coast with a herd of goats and glances up over the seas to see giant ships.  These are not the viking ships that actually would terrorize the island for several generations, but let's assume, for a moment, that it was a design more familiar to the monk.  He would have seen it in the fading, crumbling frescoes on the walls of massive stone buildings.  These constructions are so massive and inconceivable to many of the monk's contemporaries that they often attribute them to an ancient race of giants.

But the monk is not as uneducated as many of the people of his time.  The ship or ships in question display the golden eagle and the initials 'SPQR'.  The monk has read enough to know about the Roman Empire and he is aware of the history of his own island.  As the ships draw closer, he sees legionaries holding spears and swords of steel and he flees to warn the others in his monastery.

This idea is what I tried to keep in mind when I was thinking about the first contact between the peoples of Earth and Titan.  The 'first contact' in these books is not like the first contact in other science fiction scenarios where you have people encountering a completely alien race.  These two people look basically alike -there are some racial differences that have emerged through environment that I note in the book- and they share a distant history.

And yet, they are strangers.

That's the situation we start getting into around chapter 9


To be honest, I don't know exactly how Isra would have handled this situation.  By her nature, it would be methodical, hesitant and careful.  I don't see her walking out there without having an escape plan in mind.  Following her lead, it would have been a very delicate, very thoughtful and thorough affair all around.  But, for the sake of the story, the team needed to throw themselves completely within the control of the people of the city.

That's why Viekko Spade is not only a fun character to write, but a useful one.

I basically see him as Alexander's answer to the Gordian Knot in human form. Even when he's not wacked out of his mind on drugs (although that did add an interesting facet to this whole process). I employ this character trait several times in this book and in the subsequent books and I would estimate it solves at least as many problems as it creates.

Although even here, it has it's drawbacks.
\
The reason I wanted to have them under the complete control of the Houston and the people of the city is it because it is his reaction I really wanted to follow in the story.

Let's go back to that day in Britannia when the Second Roman Empire has returned to their old providence.  They arrange a meeting with the king and announce some good news.  A lot went on in Rome during that whole 'collapse of the empire' thing.   It turned out that the Jewish messiah  prophesy was correct, it wasn't Jesus of Nazareth as they suspected but a king descended from Biblical David and he resurected the old Roman Empire to bring forth the prophesied utopia.

The best news is that book, the same book that the king is using as a claim to power, has been rewritten and updated.

How long do those representatives from the New Roman Republic last do you think?

Obviously there's a lot to unpack in that historical rewrite but, again those kind of ideas that framed this meeting.  The ruler that we meet in chapter 10 is still facinating to me.  He began as kind of a shadowy figure that the team never meets but who acted as kind of a puppet master for all the events that the team has to deal with.

But as I delved into his motivations, I found a guy dealing with two very human desires.

The first was a preservation of the status quo.  This is an especially powerful motivator if one has a lot of power in society and it makes sense.  Those with power rarely want to give it up and they tend to react badly to situations that threaten it.

The second is a very real concern for the well being of his people and an honest belief in the state religion in which he is a center.  Despite some revelations in the book, I always maintain that, at the core, he believes that he and his people return to Earth when they die and live in paradise.

Though it is the first motivation that leads to the ending of chapter 10.  Because humans are not terribly good at long-term thinking.

And much like the king in that bizzare rewrite of history I presented earlier, people in power find it much easier to just make the problem go away.  Just sweep it away, hide it and hope that it never comes back.

Which is rarely, if ever, how things turn out.