It saddens me a little to have to post a warning up top out of fear that someone will read something I wrote, lose their shit and hate me forever because of it, but that's where we are.

And as a new author and content creator that is trying to build an audience, I certainly don't want to lose anybody because of something as stupid as a political opinion.

But, on the other hand, those who don't like how my mind works probably aren't going to like my shit anyway. And those who's minds are too wrapped around some planned and scripted ideology that they become outraged at the very idea that there could be Other Opinions... ....

Well I guess what I am saying is, if drawing comparisons between the current administration and a fictional totalitarian regime will upset you, stop reading.   Or keep reading.  But I warned you. 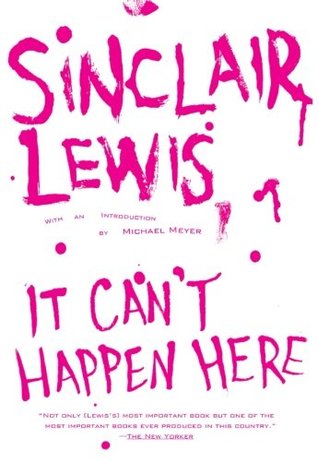 Like a great many people who spend far too much time in their heads, I had a creeping feeling of unease come 2016. An candidate for the American presidency had ascended to the office who quite obviously had no regard for the core values of a free and open society.

And, like any good, nerdy, bookish, quasi-intellectual I ran to grab my copy of some book where a authoritarian regime takes over.  Because that's what we all did.  It's almost a cliche.

Unfortunately I’ve read 1984 too many times.

So I went to Sinclair Lewis' It Can’t Happen Here.

I gotta say, this book was a tough read for me.  Lewis' dry as sandpaper style took a while to get the hang of.  Also it takes about two-thirds of the book to really get going.  The first two hundred pages are a slow build as a fictional American proto-Hitler conolodates power over the United States in between the two World Wars.  The last hundred pages, however are pretty gripping.  The whole book feels like this slow tip off a cliff.  You don't see much happening until you relize that the ground is rushing toward you.

I suppose there is a brilliance in that.  If a real totalitarian regime is going to take hold it's not going to come from some guy standing up on a stage and saying, "All right!  I've been elected so.... we're all Nazis now, that cool?  The cool with everyone?  Right?   Okay good."

No it's going to be one of those things where you wake up one day and just realize that everything that makes up a free and open society are just gone.  And in its place is a cult to the Great Leader.

But if you can slog through the walls of black text and the endless descriptions of quaint little Northeast 1930's farmhouses, there are a number of take-aways.   Or, at least, I came away with the following ten ideas.

He assured himself, though, that this flip manner of Sissy, characteristic of even the provincial boys and girls who had been nursed on gasoline, was only an imitation of the nicer New York harlots and would not last more than another year or two. Perhaps this rattle-tongued generation needed a Buzz Windrip Revolution and all its pain.

Here the main character, Dormeus Jessup. is talking about his teenage daughter sissy.  There is a constant theme in this book that the kids today are over-mothered, over coddled and just plain lazy.  They don't appreciate anything and they just expect the whole world handed to them.

Except that this was written in the 1930's and the kids he is referring to are going to fight in World War II and become, what we now call, the Great Generation or the Greatest Generation.

What does that tell you about today?  Nothing.  Except maybe that the attitudes regarding the youth of any society are practically universal and everyone needs to take a deep breath and relax.

Jessup again.  This quote in the book made me laugh to no end.  Because almost sixty years later, when we were butthurt and the French, we did it again.


3. A free and open society really is important...

"More and more, as I think about history," he pondered, "I am convinced that everything that is worth while in the world has been accomplished by the free, inquiring, critical spirit, and that the preservation of this spirit is more important than any social system whatsoever. But the men of ritual and the men of barbarism are capable of shutting up the men of science and of silencing them forever."

4. And it is up to every person to defend it.

The tyranny of this dictatorship isn't primarily the fault of Big Business, nor of the demagogues who do their dirty work.  it's the fault of Dormeus Jessup!  Of all the conscientious, respectable, lazy-minded Doremus Jessups who have let the demagogues wriggle in, without fierce enough protest.

5. But most people won't because they have too much to lose.

So debated Doremus, like some hundreds of thousands of other craftsmen, teachers, lawyers, what-not, in some dozens of countries under a dictatorship, who were aware enough to resent the tyranny, conscientious enough not to take its bribes cynically, yet not so abnormally courageous as to go willingly to exile or dungeon or chopping-block—particularly when they "had wives and families to support."

6. But, at some point, there's nothing more to lose.

Why not let the wife and family die of starvation or get out and hustle for themselves, if by no other means the world could have the chance of being freed from the most boresome, most dull, and foulest disease of having always to be a little dishonest?

So he raged—and went on grinding out a paper dull and a little dishonest—but not forever. Otherwise the history of Doremus Jessup would be too drearily common to be worth recording.

This is when, as they say, the poo poo hits the fan.  There is something encouraging in this idea that, no matter how dangerous, there will always be people who will decide that it's more important to die as a free-thinking person than live where it is forbidden.


7. Electing an authoritarian is always a bad idea mmm..kay.

There are not a lot of parallels between this 1930's society and ours.  But one is this idea that, early in the book people want to elect the proto-Hitler Berzelius 'Buzz' Windrip do so because the system is broken and they need to shake things up.


8. It sucks to be the Great Leader

And daily he wanted louder, more convincing Yeses from everybody about him. How could he carry on his heartbreaking labor if nobody ever encouraged him?

This from 'Buzz Windrip as his administration starts to fall apart.  Because if you have the kind of ego that demands that everyone love you and follow you, you're going to get really butthurt when they don't.


9. And when the Great Leader is Gone, the Cult Collapses.

Can you imagine the Nazis without Hitler?  Was Soviet Russia ever as fearsome without Stalin?  The Cult of Personality is good for giving people a voice and a leader to guide them but, when that powerful force is gone, their vision -for good or evil- tends to die with it.

Once -SPOILER ALERT- Windrip's second in command assassinates him, it marks the begining of the end for that regime. Why?  Because without that leader, there is nobody to lead.

If there was one encouraging thing in the book, it was this:  All the signs in the book that the society was decending into totalarianism weren't there.  Free speech is still fairly strong.  One might even say stronger than ever.  As much as Trump rage tweets, the structure that our government was built on is standing.

He might have been able to if he were smarter.  Or less insane.

Because hundreds of years ago, the founders knew that, someday, we would elect someone like Trump.  Or Buzz.  Or somebody.  And there are protections to make sure that they can't bring an end to democracy.

Obviouly the lesson of the book isn't that it can't happen here because... uh... the whole point is that it can.  And might.

But the lesson should me, if I might be so bold, that we should defend the freedoms of the country and the structures that guarantee it always.  Because the moment we don't...

I guess what I am saying is.  Next time a president or senator or, hell, even a fucking mayor is trying to pass a law or enact some ordinance, I believe everyone should take a moment and think, "What if someone I really, really don't like was trying to do the same thing?"