An Open Letter To The United States Government

Listen, can we talk?

Let's get something out of the way.  Government shutdowns are political theater.   They the world's most expensive three-ring circus where there is no ringmaster, the entire show is exclusively run and performed by clowns and the entire show is just them throwing cream pies at each other and occasionally kicking each other in their little toot horns.  And a good portion of the audience hasn't eaten, just wants the show to be over so they can go back to work and would really like one of those cream pies the clowns are just throwing around.  This shutdown also features a drunken orangutan on calliope who occasionally stops to tweet things like, "WORST SHOW EVER.  RUN BY SAD FACE CLOWNS!  Must not allow sad face clowns to keep kicking happy clowns in nuts. SAD."

It's stupid, people are hurting and, above all, it's fucking embarrassing.  We need to reach a compromise.

And as a patriotic citizen of these United States, I would like to offer a deal that should placate both sides and allow us to set the tattered remains of this republic limping along for a few more decades.

Up for debate is The Wall.  Which is to say the big, beautiful wall along the Mexican border that will keep out all illegal immigrants and drugs (except the ones Republicans need for constructions projects/ recreational use) and fix all problems forever and ever, fuck the snowflakes #MAGA.

The Republicans for reasons, that I will never in the fullness of time comprehend, demand that the US build a wall.  (I fully expect that sometime in 2020 or 2024 -depending on how long this bender goes on- the entire Republican party will stumble into the daylight, clutch their head, look at their watch, look at the crumbling remains of this once proud republic and mutter 'what...what the fuck did I do last night?  I gotta stop drinking tequila.)

The Democrats, in a rare show of fiscal restraint or just general contrariness, refuse to fund it.

And we find ourselves here.

I want to start by saying this.

Democrats.  Listen, I'm glad to see you actually unite on something.  It's better than your usual act which looks something like the Three Stooges performed live  while Wall Street showers the stage with money.  But you're going to need to bend a little.  It will be fine.  Stick with me, I've shoved something special into this deal for your supporters that will help seal the deal.

Republicans.  I get it.  In order to continue to get your core demographic to continue to support tax plans and corporate policies that essentially force them to hand all their worldly possessions to a small group of oil barons and bankers, you needed a scapegoat.  Illegal immigrants was an easy choice and you had the media outlets to whip your people into a rabid frenzy.  Unfortunately, that key demographic in question went and elected, what is basically a cartoon villain.  He's come up with something ungodly stupid but, in order to keep the lie going, you have to go with it.

And Trump promised them the Wall.  (He also notably insisted that Mexico would pay for it which has obviously turned out to be a pile of horseshit big enough to build three Walls but let's move past that)  Mr. Art-of-the-Deal has obviously proven that he couldn't negotiate a baton pass during a relay race, so this turd sandwich has been yours to take a big, steaming bite of.

Despite that it’s been done before with, at best, limited results other than a slight uptick in tourism several hundred years later.


Despite the fact that most Americans don't even want it anymore, if they ever did in the first place.


We need The Wall.


Because, as many Trumpian apologists breathlessly describe, The Wall is not an actual physical wall.  It is a metaphor for a series of greater issues.  The Wall is a symbol for things like increased border security, tougher immigration laws, a military presence at the border, man's inhumanity to man, that coming-of-age moment when a young man sticks his dingus in a microwave he overheated in a microwave and humankind's tendency to let fear drive it into insanity.


But as long as we are speaking in metaphors let us talk about what the people who want the wall really want.  What motivates the most rabid Trumpist adherent.  Anger.  Good old fashioned, White American, Not-In-My-Backyard, Speak-English-You-Godless-Heathen, Fuck-Everyone-In-The-World-Except-For-Me, anger.  The kind of All-caps anger you see at the bottom of a Yahoo News article.  Except harvested, squeezed, filtered, distilled, dried and shot right into the largest vein in the nation's cock.


The wall, in this case, is not a wall, but a giant middle finger to the rest of the world.  Particularly Mexico and Mexican-like people which, in Trumpian terms, covers just about every human south of the 30th parallel.


So if they really want a middle finger.  Why not build that?


Johnny Depp famously paid 3 million dollars to build a cannon to shoot Hunter S. Thompson’s ashes into space, the design of which was a 300’ metal pole with the Gonzo Journalism symbol -a hand with two thumbs gripping a peyote button- on top.

You can probably see where I'm going with this.


Replace the Gonzo sigil with fist displaying a single angry digit and put it up right on the southern border.  Something like this: 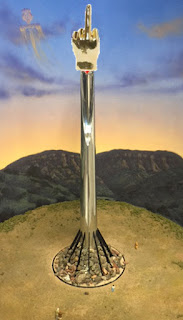 Even if it costs twice as much -which given the federal government is not a stretch we can erect this monument to petulant white anger for about a tenth of one percent of the proposed cost.


Which means we can sweeten the deal.


We could make a hundred of them.  They could go up along the southern border every hundred or so miles, especially along well-traveled routes.  Imagine a hundred gleaming middle fingers sending a proud and unified 'fuck you' to our Southern neighbor.  Fuck it!  Let’s paint them gold too just to make sure Trumpy approves.

And let's not forget.  That was three million for a cannon!  We could probably save money and make them simple metal poles with The Mighty Bird at full mast.  But Fuck. That. Noise.  We'll keep them as fully functioning cannons.


And we will even fire them off one day a year.  And I've actually got a suggestion for the annual Firing of the Middle Fingers.


This abomination of corporate greed is already so uniquely American that I can't think of a better day for hundreds of thousands of rabid Trumpites to pile into their cars and drive south for a weekend drunken, down-home debauchery that will make the after party of a Ted Nugent concert look like Woodstock.


And they would probably want to leave early which means that every family's most annoying member would suddenly have better things to do on Thanksgiving then spread conspiracy theories and vitriol all over the table like that cranberry sauce in a can that NOBODY LIKES! (See!  I told you I stuck something special in here.)


All in all, it would be just as effective as an actual wall but for a fraction of the cost. Maybe even more so.  Because at least one day a year, fuck if I would go anywhere near the southern border.


The Republicans get to placate their core supporters, the Democrats get to help at a fraction of the cost, federal workers get to go back to earning a paycheck and we all get a little vacation one day a year for one reason or another.


I humbly submit this compromise so that we can move forward as a country and fall face-first into the next Biblical-scale Clusterfuck.