Every once in a while I find a book that is just gloriously, unapologetically and intensely weird.  It’s the kind of book that yanks you out of your dull day to day world, slaps you around and dumps you by the side of the road with your pants on backward and cab fare stuffed into your back pocket.  Xenoman is one of those books.   This book is basically what would happen if the Church of the Subgenius wrote the Fear and Loathing version of Hitchhiker's guide to the galaxy. 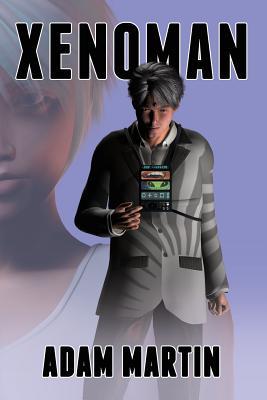 The story takes place in a commercial dystopia populated by fame-crazed, drug-addled pop stars, love-sick video game avatars, orgy couches, a terrifying fast food franchise named Klownburger and a designer drug with the minor side effect of causing its users to burst into flame.
I don’t know why this book was so entertaining to read but it just… was.  A lot of times I found myself pouring though the story thinking to myself, "I have no fucking idea what is happening and I don't care!  This is awesome!"  How exactly does the author, Adam Martin, pull this off?  Well, I'm going to mostly use quotes from the book to answer that because I think they speak for themselves.

1. The Author Takes the Inane and the Bizarre and Slams Them Together Like a Baby With A Saucepan:

She  caught  a glimpse  of  a  couple  on  the  showroom  floor,  testing  out  the  latest  orgy sofa.  The  salesman  tapped  the  sofa  control  panel  and  appendages  extended from  the  plush  surface  in  all  shapes  and  sizes,  accompanied  by  orifices that  expanded  and  contracted. The  woman  unbuttoned  her  blouse  while  her  consort  unzipped  his pants.  Circular  blinds  enclosed  the  trio  for  more  privacy,  while  other shoppers  continued  feeling  out  the  furniture,  testing  the  poofiness  factor, sternly  talking  over  the  price  tags  with  the  sales  team,  making  rectangle shapes  with  their  fingers  as  if  framing  where  it  would  sit  in  their  own living  room.


2. It Provides a Glimpse Into The Modern World By Viewing the Extremes:


3. There Is Anarchically Snarky Glee:


4. There Are Ideas In This Book That Will Haunt Your Dreams:

Me: *Shutters*
To be clear, that is a flyer that, if you lick it, another human on the other end feels it.  If that isn't Twitter gone totally off the cliff, I don't know where the cliff is.

6. Some Books Break The 4th Wall. Others Bulldoze It:


8. There is Sophomoric Humor And Then There Is This…

“That's  the  Atomized  Synthiopathic  Synapse.”  Garry  stood  shoulder to  shoulder  with  Xeno  on  the  shore  of  artificial  grass,  admiring  the monstrous  technology  with  a  look  of  pride.  “Also  known  as  our  ASS.  The summit  of  mankind's  artificial  intelligence.”

Warning.  A whole book load of ASS references ahead.  And, as much as they should have gotten old, they didn't.  It still made me giggle.

I... I don't know.  It just did.  Maybe I was in a weird mood.  Maybe my brain was just craving something intensely bizarre. Perhaps the combination of capitalist dystopia and snarky fun hit me right in the happy spot.  The biggest thing to take away is that sometimes I love a book because it tells a gripping story that comes together well and characters I love take me on a journey.  And sometimes I love a book just duct tapes me to a rocket and says ‘good luck!’ as it lights the fuse.