Yes, back to Terry Pratchett again. I love the fact that he was so prolific during his life that if I keep diving into Diskworld every year or so, I'll still have new Terry Pratchett stories for another decade. Because books are awesome like that.

But this one might be a new favorite of mine. 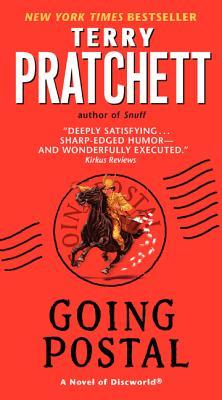 Moist Von Lipwig is about to die. As one of the most infamous conmen in all of Ankh-Morpork, he has been sentenced to be hung for his crimes, although the people of Ankh-Morpork are very nice about the whole affair. But, after the lever is pulled, he finds himself cleverly spirited away at the last minute to face an arguably more horrible fate. The Ankh-Morpork post office has fallen into disrepair and irrelevance and Lord Vetinari, the Tyrant of the city, has ordered him to be the new postmaster general.

When he first arrives at the post office, he is greeted by an old man from mail's glory days and an overly excitable pin collector (or pinhead as they call themselves) and thousands of undelivered mail. While exploring the inner depths of the abandoned post office, he becomes struck with a vision and becomes the avatar of the messenger god. He resolves to use his skills as a conman against the company that owns the 'clacks' a kind of telegraph analog, reawaken the sleeping post office and get the mail moving again.

1. Probably the Most Relevant Discworld Novel To Our Modern World:


Sir Terry is brilliant at taking aspects of the real world, twisting them and pushing them into the Discworld where they can be examined with more care.  One of the main issues in this book, though, is how much do we allow huge corporate interests to control the technology on which we base our lives. This book looks into the soul of this fictional company, The Grand Trunk, and asks the question, 'Should these robber barons be allowed to run an ice cream stand, much less a technology that connects the entire world?"

2. Following One of the Most Underrated Characters:

Moist Von Lipwig only has a few novels in which he is the star. He's got nothing on the almost iconic characters from Pratchett's world such as Rincewind, The Witches, or even Commander Vimes who's very names almost embody the spirit of Discworld.  But of all these zany characters, Moist stands out as almost the straight man of a world gone completely bonkers. One gets the feeling that he never knows why he sees what he sees, only that he can maybe scam a buck or two.

But he is especially intriguing in this novel for his almost suicidal urge to push the envelope to the breaking point. Just when you think he's won, he goes out of his way to make his own victory harder, as if just to prove he can.  He's like a trick shooter who voluntarily blindfolds himself before a quickdraw match.

It just wouldn't be any fun otherwise. 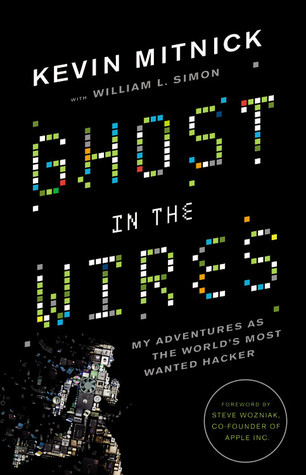 One of the major technologies used in the book is something known as 'The Clacks.' Without going too far into it, one can think of it as a primitive telecommunication tool or even telegraph. Through the use of complicated semaphore, messages can be sent across Diskworld in hours rendering the Post Office useless and, thus, overflowing with undelivered mail.

But the interesting thing is that reading the book really made me appreciate another book I read several years ago. It's a non-fiction story about probably the first and most notorious hacker in history. And a lot of that comes from how Mitnick got his start. Long before hacking computer systems and cell towers, he had fun just playing pranks on the phone companies using almost laughably simple tricks.

And that was interesting because...

4. The Spirit of Hacking Is Alive

It's weird to come across a group of hackers in Discworld, but they are there, and they live to make life difficult for the Grand Trunk. And the way they operate would put a smile on the face of Mitnick himself. One of the more brilliant things Pratchett does in this novel is describe this weird sub-culture of mad tinkerers in a way that flows beautifully with the rest of the story. You feel like you know these people. Not just know them but have to deal with them every time you ring up IT.

The villain of this book is the perfect complement to its main character. Reacher Guilt is not only a conman but possibly the greatest conman. Even better than Moist himself. This master and twisting words and minds runs the Grand Trunk out of...

Sir Terry passed away long before 2016, but I wonder if he didn't see something the rest of us missed. Or maybe just a cheeky jab at a sad cultural icon that turned out to be an amazing accidental prediction. Either way... Oh, My Gods.

6. At The Crossroads of Profit and Utility:

The more important issue that the novel deals with is trying to figure out where the need to generate wealth ends and the interests of the public begin. In the novel, The Grand Trunk is every worthless mega-corporation you have to deal with in real life. They are the cable company that manipulates your bills, the telecom service that doesn't work and makes you pay anyway, the credit card company that robs you blind and tells you it's your fault. All with Reacher Guilt at the helm.

And through it all it begs the question, aren't there thankless, unprofitable but incredibly necessary services that must be carried out to keep society moving? And, assuming there is, who really should be in charge of something like that?

7. The Truths of the Corporate World:

Anyone who's ever had to suffer through corporate documents will immediately identify with this passage:

It was garbage, but it had been cooked by an expert. Oh yes. You had to admire the way perfectly innocent words were mugged, ravaged, stripped of all true meaning and decency, and then sent to walk the gutter for Reacher Guilt, although “synergistically” had probably been a whore from the start."


8. And while we are talking about the use of language:

For the record, “Trumpet and skittles” is my new favorite euphemism for male genitalia.

Leaving all the implications about the real world aside, the casual reader will no doubt appreciate the build-up of this story. The novel itself is like a fantastic con game that you can't help but get sucked into. I had to read this book in and around some other novels I have been reading for a Goodreads author group, but I loved how I could leave it for a few weeks and come back and be instantly immersed again.

10. The Truth About Gold At The End of the Rainbow

One final thought from Sir Terry himself:

"They'd saved the city with gold more easily, at that point, than any hero could have managed with steel.  But, in truth, it had not exctly been gold, or even the promise of gold, but more like the fantasy of gold, the fairy dream that the gold it there, at the end of the rainbow, and will continue to be there forever— provided, naturally, that you don't go and look.

This is known as Finance."