The inspiration for picking up this book came from a strange place. This was the first book ever to be listed on Saturnius Mons' Amazon Page, as 'People Who Bought This Book Also Bought.'  Now, at the time, it probably meant that one person bought Saturnius Mons and this book at the same time, but that is an interesting thought by itself. Plus, I was so intrigued by the cover and the fact that my book has nothing obviously in common with this one that I felt compelled to see what was inside.

So here we are: 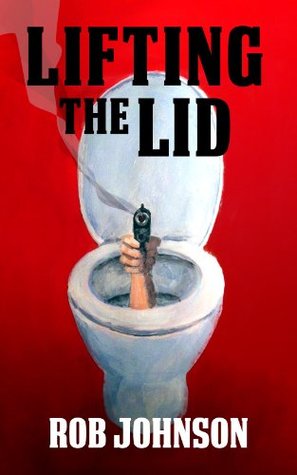 Trevor Hawkins looking for an escape. He's fallen into a rut so he's packed up his belongings, along with his terminally misbehaved mutt, Millie, into a VW campervan and has left his life behind looking for adventure. He didn't expect this much. During a comically insane switcharoo involving a broken toilet tank lid and traditional British embarrassment, Trevor ends up with an envelope containing a set of instructions. A set of instructions that was supposed to go to Sandra, a private detective that was offered a large sum of money to make sure a package was picked up and delivered to a group of gun-toting gangsters who are suddenly very interested in Trevor. Add to that a couple of inept MI5 agents, and a police force increasingly hot on the trail, Trevor finds himself careening from one dangerous situation to another. And worse yet, his own past seems to be catching up with him.

The major thing that fell flat for me is that this was supposed to be an 'action comedy thriller' and it just missed the mark and I'm not sure why. Maybe the exaggerations weren't there. Maybe that dry English wit just wasn't on point. Maybe I just didn't get the joke. But outside of a few minor chuckles, nothing struck me as irresistibly amusing. Although that being said...

2. In The Author's Defense, Comedy Is Hard:

Writing, in general, is hard, but I think writing comedy is especially difficult and I have some experience with this. The first novel I ever tried to write—which has been forever banished to the deepest depths of my hard drive—was supposed to be a comedy. At least I thought it was.  I remember giggling in almost masturbatory glee as I wrote it. As the words poured out of me, I couldn't believe how fucking clever I was. (I was an idiot. I'm okay with that.) Luckily I was working with a writing group at the time, and some of the other members were honest enough to basically say, "Yeah, I don't get it."

The problem is that it's just the reader and the author. It's not like a comedy show or a movie theater or even a movie at home with two or three other people in the room. It's just me and Rob communicating telepathically via paper. And me going, "Okay, buddy, make me chuckle." What a person finds funny is so subjective and sometimes changes minute to minute.

I guess what I am saying is that I have to give a bit of a pass on this aspect. Not to say it doesn't have a few good points.

It's like this. Trevor, an almost terminally embarrassed and awkward Englishman (I couldn't help picture Hugh Grant with a ponytail) accidentally breaks the toilet tank lid in a hotel. Mortified about admitting what he did and, perhaps getting charged more money that he didn't have, he sneaks into another room and swipes the toilet lid. The problem is that room is being rented by a private detective who's just been hired to pick up and deliver a mysterious package, the directions of this assignment hidden underneath the toilet lid Trevor steals.

The set-up was so delightfully absurd and well-executed that, as the reader, I couldn't help but face-palm as I watched the characters do ridiculous things for a completely understandable reason. Well...mostly understandable for stammering, be-ponytailed Everyman and the sharp diet-obsessed private eye. But it kinda goes downhill from there.

4. Why Is The Main Character Starving To Death?:

Maybe it was one of the jokes, but Trevor spends the entire book not eating. He occasionally tries to grab a bite but is thwarted. Or he just seems to forget. Another running gag is that people are constantly asking Trevor, "Is this your dog?" which is a fair question since Trevor is constantly sneaking his dog into places that do not allow them. It think both these running themes are meant to be funny but, again, I don't get the joke.

Another running gag. Sandra, the hard-nosed private detective—and the only character that seems to have a fully functioning brain at times—is regularly in a deep philosophical debate on whether or not to have another piece of toast at breakfast.  Which, again, not sure what the joke is there.


6. Why Is The Gang Leader Such An Ineffectual Arsehole?:

I think the idea was to create a character that the reader would despise on some level so that when he met his ultimate fate, the reader would jump up and cheer. But I didn't get that. What I got from Harry was a character who was just... well... an asshole. And not like a ruthlessly effective Walter White-style asshole. Just... an asshole. Who, when his fate was revealed, made me go... yep, maybe that's why you shouldn't be such a dick to your own people.

7. Let's Hear It For The Scotsman:

The only character that I really dug in this book was MacFarland, the gruff, Scottish bruiser that never appeared to get a break. There was almost a Rodney Dangerfield aspect to him. In my head, I pictured this gun-toting mountain of a man who, in the end, 'Can't get no respect.'

It was a fun, light-hearted crime spree like a Guy Richie movie but with a softer touch. Although I feel that anyone going into this hoping for sharp wit or a keen sense of dramatic irony are going to be disappointed.

It does have a sequal, but I don't see myself rushing out to grab it anytime soon. The plot of this book wrapped everything up as well as can be expected, and nothing about the main characters really grabbed me enough to see them darting willy-nilly through another caper. I liked this book well enough but that is where the story ends for me.