A vision of the past as seen from the future. Set in near-future quasi-dystopia Virtual Light follows Chevette Washington, a young bike messenger who makes her home, along with aging burn-out Skinner, on top of the Golden Gate bridge which has been turned into a shanty-town of sorts. In true cyber-punk, dystopian punk fashion, it is the last place in a cruel world where the working poor can live and be themselves. 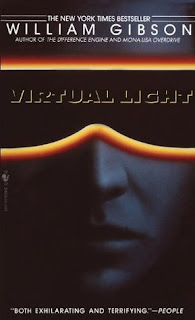 But Chevette when makes the mistake of lifting a pair of expensive sunglasses from a drunk groper at a party, she finds herself a target in a shadowy conspiracy. Enter Barry Rydell, ex-cop, ex-security guard, ex rent-a-cop, ex pretty much anything. He is hired to drive for a team whose mission it is to recover the glasses. But when he sees the murderous truth of it all, he rescues Chevette, and they ride out chased by all manner of Bond-villain-esque characters.


1. The Future Is...Ten Years Ago?
The part I loved best about this book and the most quotable parts of Virtual Light involve the author's predictions about the near-future.

“We are come not only past the century’s closing, the millennium’s turning, but to the end of something else. Era? Paradigm? Everywhere the signs of closure. Modernity was ending. Here on the bridge, it long since had.”

“There’s only but two kinds of people. People can afford hotels like that, they’re one kind. We’re the other. Used to be, like, a middle class, people in between. But not anymore.”

“And Yamasaki knew, without asking, that the red dancer represented the way of Shapely’s going, like some terrible base stupidity waiting at the core of things.”

These are a few, but there are many others, and I loved the way they were eerily accurate but just not in the way the author probably imagined they would be at the time. It's like a writer during the 2007 market crash imagining the country being run in ten years by a deranged cartoon character vis-a-vis Waldo from Black Mirror.  I mean, wow, spookily accurate but the real-life implications would scare the shit out of the poor soul who actually wrote it.

2. A prediction on Google Glass:
Among those scary predictions has to do with the titular device Virtual Light a pair of glasses that function as a computer. And much like their real-world analog, they seem to be a big deal, everyone is talking about it, but it only shows up a couple of times, and then it disappears. They don't affect much, and nobody seems to care.
That's right, take that Google!

3. Cult of Personalities:
The biggest draw of this book was the characters. Chavette with her spunky, go-gettum-girl punk rock attitude. Skinner, her gutter poet/ philosopher father figure. Loveless the dark, bizarre, Bond Villian hitman. Sammy Sal, Chavette's sassy best friend and coworker who really helps frame the world we find ourselves in.
Overall, Rydell is probably the weakest character but, when I got past his mono-tone Male Protagonist Hero persona, there are glimpses of a man desperate to find his place in a world that seems to not want him.

4. Now where did I put Chekhov's Gun?:
The story is the weaker element in this book, although I'm keeping in mind that this is the first part of the series. But I could never figure out why this Holy Mcguffin, Virtual Light, is so great that everyone seems willing to kill over it. It looks vaguely tied with this dark, sinister plot to turn San Fransisco into a haven for the rich (another amazing prediction just, again, not in the way Gibson likely anticipated.) The story takes the reader on a thrill ride through a near-future eerily like our own, but I feel like the whole reason we are taking this journey is fuzzy right now.

5. Sexual Tension You Could Cut With A Hand Wave:
Maybe it's inevitable in a novel like this. You got the spunky, quirky, young punk-rock girl living life on her own terms until all hell breaks loose at which point she gets thrown together with the gruff, world-weary former cop. While running for their lives, sparks fly, and they begin the 'will they, won't they, for the love of all the GODS, please fuck already' dance. But in this book, for some reason, I just didn't believe it. It was like both characters were looking at each other and thinking, 'Well the plot pretty much demands that I want to jump his/her bones so... Yeah, I guess I do?'


The romantic aspect felt forced. As if the editor read the first draft and sent back notes that said, "Yeah, these to characters gotta bang. The reader is just not going to be into it otherwise."At which point Gibson swore and just wrote it in to get the editor off his back about it.

6. Back to the Bridge?
Despite its shortcomings, the world and the characters are enough that I've got the next two books of the Bridge Trilogy on my To Be Read Pile. And even now as I immerse myself in yet another cyberpunk thriller -I'm kinda digging on those recently- I'm looking forward to going back to the world of Virtual Light.