Res, the star of the perpetually popular band, Lo/Res has just announced that he intends to marry Rei Toei, the newest and hottest pop sensation adored by all of Japan. The thing is, she doesn't exist. She is an idoru, a purely synthetic being that doesn't have any presence in physical reality.

Laney is at the lowest point of his life. As a private investigator for the all-reality television network Slitscan, his job is to probe data on the net to find hidden clues and patterns. But when his gift helps him predict but not prevent a suicide brought on by his employer, he is recruited by a new group called Out Of Bounds, a counter-counter journalistic entity that wants to expose how Slitscan exploits a population obsessed with fame and sensationalist news. And his first job is to find what shadowy group must be behind Res' desire to marry Rei.

Meanwhile, the Seattle chapter of the Lo/Res Fanclub has sent Chia to Japan to meet with the Tokyo chapter to find out why the idol of their affection is marrying something that doesn't exist. But she is caught up in a dangerous situation all her own when a smuggler slips something important into her bag at the airport. It is a secret that many are willing to kill for.

The story jumps back and forth between Laney and Chia as they get closer and closer to  the other-worldly love between two pop stars, one real and one not. 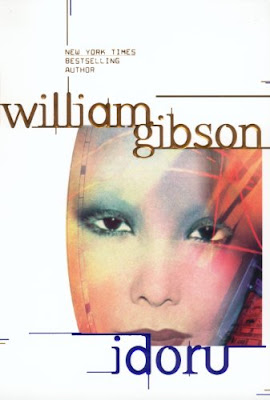 Okay, I picked up this book because I really enjoyed Virtual Light, and was looking forward to picking up where the characters left off. I felt there was still a lot that was left open both in the story and the world. And there probably is. It just isn't in this book. Despite being part of the series, only a couple characters from Virtual Light make an appearance here. So, at first, I was a little annoyed. But I quickly fell into this book on its own terms.

This book really is about fame in all its forms. There's the destructive kind that consumes a young woman's life early in the book and sends Laney on his path. There's the almost religious personality cult that elevates mere mortals like Res into  demigod status. There's the heavily engineered form that has created Rei from literally nothing. And there are the multitudes that are drawn to it, either because it's how they eke out a living, or because of a primordial compulsion to follow those with status.

The part of this book that I struggled with was the characters. Laney was your basic down-on-his-luck dude trying to find a place in this world and a way to be of service to it. In fact, you could basically switch him out with Rydell in Virtual Light, and I don't think anyone would notice. Chia was just kind of... there. She was a blank slate through which we could see a world of fame-gone-bonkers through the eyes of someone who couldn't see the madness. Oh, and her life was constantly being threatened since she arrived in Japan.

It could be argued, I suppose that the other characters were so dim so that Res and Rei could shine through. They are perpetually on the sidelines; I could see their hands guiding events in the way they wanted. So maybe there is a commentary about fame vs. us poor plebs? I dunno, I'll leave that question to the scholars.

Spoiler alert.... but not really. Well, maybe a little bit. Okay, toward the end, Chia finally gets to meet Res, and it is this compelling moment for a character that basically provides the lens through which we can see the world. Again, there was nothing about Chia that really resonated with me, but there was this moment when he walks in the room, she sees him, recognizes him and the whole facade comes crashing down in front of her eyes. I think anyone who's actually met a famous person they admire has had a similar experience. At least I have. There is this moment of realization where you go, "Oh. Yeah. They are a person. Well, that's a let-down."

It's telling that the story revolves around Rei, a computer-generated celebrity (a thing that actually exists now. Becuase of course it does). She is, in a sense, more real than the fame that surrounds her. She can rise above that let-down moment because she's never going to be there. She's like a mass hallucination of our society. Her dreams are the videos people watch. Her image is what people want to see.

Throughout this book, we watch characters put themselves in harm's way for that idea. Whether it's Laney chasing down patterns because it's his job or Chia because she just feels a need to be part of something bigger than her, the book is basically experiencing people doing dumb shit for nothing. But in a good way.

Despite its shortcomings, I'll give it a five-star. Because every time I started to waver and wonder if I really liked this book, Gibson would whip out some insight about fame and technology and the characters would be thrown headfirst into another shitstorm. It was a fun, compelling book, so why not?
Labels: Book Review What Jeremy is Reading