6 Things About The Edge Of Doom

Durban Chola is the undisputed boss of Starcity’s criminal syndicates. With the two ex-soldiers from the punitive ‘Specials,’ Jaz and Avilon, at his side to provide protection and muscle, there is nobody in the criminal underground that can stand against him.

But when the legendary criminal, Shame Cullen, rises again and makes an attempt on Chola’s life, violence erupts all over the ‘City. Together, they must uncover the truth behind Shame Cullen and defend themselves from the other criminal organizations closing in before it’s too late. 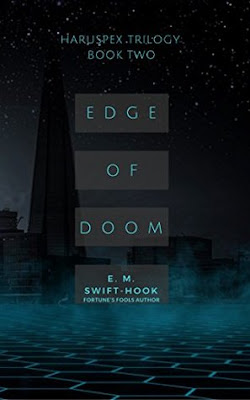 1. It Took A Whole Book To Get To This Point But:

It's not to say I didn't enjoy the first book in the Hauspex Trilogy, I did. But it struck me as an infodump. A very well-written infodump but an infodump regardless. Book one introduced us to the characters and told the story about how their fates would become bound together, like chess pieces moving into position. Edge of Doom is the attack.

2. Starcity, the worst place in the Universe:


Starcity or, just 'City as it is often referenced in the book, reminds me of a science fiction Gotham City. Starships and laser blasters and no caped crusader to keep the criminal element underground. The complex, gritty world really provides everything this story needs along with an intriguing villain that is both everywhere and nowhere.


Okay, sorta kinda spoiler alert, but one of the major adversaries from the first book is back. But they are not who you thought they were. In fact, they aren't who anyone thinks they are. Shame Cullen is everywhere and nowhere. They are behind every plot and every power grab. As far as antagonists go, I love the almost mythical status of this one. It adds that extra level of mystique to this world.


The world provides just the right environment for these characters to really shine. There is a lot to love here, but one element I particularly liked was Avilon's development in this book. Assigned to the Specials for a crime he has no memory of, Avilon was always an intriguing character. But now we begin to see that, not only was a horrible person who did a terrible thing, but he was also kind of a badass. Brilliant and capable, the person who Avilon was is everything that he feels that he's not now. And that conflict between wishing he was 'that guy' again and yet being horrified by the crime he committed is really engaging.


I don't want to give anything away, but the one thing that did get to me a little bit was the rather unceremonious dispatching of one of the characters from the first book. They were never a major feature but I think their fate deserved more.  That's all I'll say about that.

A few issues aside, I really dug this book. Much like the first, it's not a story one can dip into idly, but one that requires the reader's full attention. Preferably with the lights dimmed, some soft mood music, and maybe a glass of scotch. (Or your fancy beverage of choice.) To get the full effect it is necessary to read Trust a Few but, as said before, I think it's worth it.
Labels: Book Review What Jeremy is Reading