Powered by the solar eclipse, the Clipses are beings blessed with superpowers who roam the galaxy in search of the cure for the Apoptosis disease, which is one of the few things that can destroy them.

But when talented and brash Krill’s sister is killed by a member of the Celestial Council, he is set on a path that will pit him against the people he’s come to know as family. 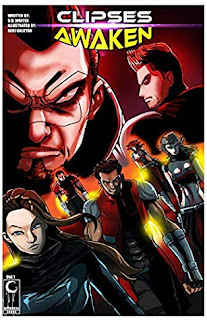 1. If Samari Champloo and Star Wars Had a Love Child:

At least that's the vibe I got. The art put me in the mind of anime like Champoo or maybe Bleach more accurately. And there's definately an epic narritive feel to it complete with the tragic hero but I'll get to that in a bit.

2. Welcome to the World. Hope You Brought a Notepad:

The world the creators built is both the greatest strength and greatest weakness of this graphic novel. On one hand I have to appreciate the sheer depth of this world. The powers and governing rules regarding the Clipses are detailed. The history is deep. The vastness is astouding. As someone who has had to sit down and world-build I have to tip my hat to this book.

But, as I said, that's also the downside. I feel I would need to sit down and read through this at least three or four more times in order to understand everything that was going on. But, for me, the graphic novel format doesn't led itself well to a lot of exposition. Complex storylines are definatly a feature but I feel like this book had to ease into it more. As it is I felt like I was bombarded with so much backstory and worldbuilding that I had trouble sniffing out the actual story.

4. Say hello to your hero...er villan... you know what?  Meet Krill:
I did like the main character quite a lot. Krill has all the hallmarks of a kind of tragic hero.  Almost a Darth Vader origin story (if Darth Vader's origin story had been done well, that is.  I mean seriously. Could Anakin Skywalker be more of a whiny bitch?) he is a talented and promising student. He was actually born on an eclipse which means he has the potential to grow his powers far beyond most normal Clips. And a member of the Celestial Council went and killed his sister.  And now he's got a grudge.

5. So Why Exactly Did They Kill His Sister?:
Short answer; it's complicated.
Longer answer, I really am not sure. We are tossed into a world that is just cooling after some kind of war between the Solars and the Lunars. Krill's sister had something to do with that. Again, I would have to read this a few more times to suss out exactly why.

6. The Tale of the Clipses Continues?
I will admit that the book lost me in a very murky middle but, once it found it's footing again and Krill started his mad dash for vengense, I was hooked again. This is the first book in the series and I have to say I would pick up the second to see where this tale takes us.

7. The Verdict ⭐⭐⭐⭐
Overall, I enjoyed it. Even though the narritive does get lost, the art, characters and, especially the world did a lot of work to keep me interested. Its worth a read for anyone who might get a kick out of a sci-fi superhero graphic novel.