9 Things About The Shamans At The End Of Time.

After being injured on a deadly modern battlefield, Vlad wakes up in a strange land. Civilization has reverted to a hunter-gatherer culture. The people practice mind-expanding religious rites. And, what’s more, he finds himself inexplicably bonded to two girls in the village. But this world is at a turning point, and an aggressive male-dominated village nearby threatens the peaceful place Vlad now calls home. Now he must rely on his military training and his newly-formed shaman powers to protect the people he has come to care for and the women he loves. 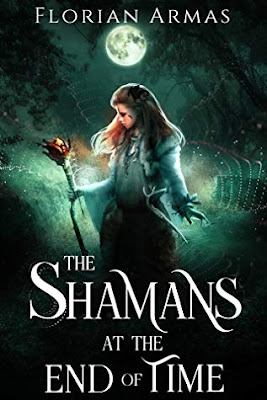 1. Stranger In A Strange Land:

To be honest, I always cringe a little when I start a story only to realize that it's premise is this: Take modern human person, transport them magically to a different time and place and see what happens!

Because what usually happens is they walk around confused for a few hundred pages until they realize they have to live there forever or they get to go home.

2. A Look Into Human Origins:

Confession time, I'm kind of a nerd. And one of the obscure subjects I like to be nerdy about is theories regarding primitive human culture. The exact story about how we went from small ape-like creatures foraging in the savannas of Eastern Africa to ....whatever the fuck we are now, is at the heart of what we are and where we are going as a species. And it seems that the author, Florian Armas, is a bit of a nerd in that regard too. Or, at least, she did some reading on the subject which I dearly appreciated.

3. Hey! You With The Cellphone! You're Not As Smart As You Think:

One of the theories she brought up was one I just recently became aware of. I was listening to a talk from a science writer who had spent a great deal of time among the tribes of Papua New Guinea. And he talked at length about how highly intelligent he found the people who lived there and his theory that hunter-gatherer cultures naturally select for higher intelligence. That was actually brought up in this book and was well used and added a layer of authority to this work.

One thing I found a little on the nose was the gender politics discussed in the novel. In the book, Vlad is transported to an ancient land and comes to live in a peaceful matriarchal society that worships the Mother and, in which, women are held in the highest regard. Conversely, the village is under constant threat by a militaristic patriarchal society who worship The Bull and who treat their women as broodmares.

I'm not saying I disagree with any of these ideas. But there was a lot of me mumbling, 'Yeah, I get it. Men are basically the worst.'

Without giving too much away, it is actually a woman, a supreme matriarch that sets in motion a series of events that ruins everything toward the end of the book. So... maybe the real take away is that People Are The Worst. All People. The Worst.

I realize that I haven't said anything about any of the characters. Partially that's because, for me, there wasn't much to say. Most of the other characters were interchangeable for me, I could never really get a unique voice from much of anyone. The main character, Vlad, is the brooding male archetype that romance loves to use. A kind of strong, silent type that is vulnerable deep down but nobody gets to see it except the One Woman who can open his heart.

If romance is your thing, you probably like this archetype.


Again, without giving too much away, the book just ends. Part of the issue is that Vlad never really develops any motivation or goals of his own. He mostly, like I said before, wanders around confused, so there's really no character arch for him to complete. So the book ends with Vlad learning the moral of the story.  Which is...

Again, I don't disagree with that assessment. But it is a theme. A very, very strong theme.

It was okay. Fans of fantasy romance, especially the romance part, will likely love things that I found annoying. They will also just understand some subtext that is simply lost on me. But I feel there are also issues, particularly toward the end, that are going to leave even the most forgiving fans of the genre feeling unfulfilled.