9 Things About: The Adventures of Tom Stranger Interdimensional Insurance Agent

Who do you call when Purple People Eaters are invading your world, or you get rear-ended by a rusted-out demon dimension? Call Tom Stranger, Interdimensional Insurance Agent.  And make sure your premiums are paid.

Tom is on a mission to provide excellent customer service to clients. Even if it means braving tentacle monsters, the undead, or (gasp) a Nebraska call center.  It's just a day in the life for the Universes most badass insurance agent. 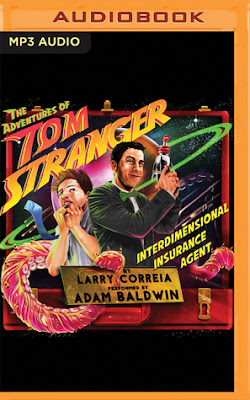 1. Insulting Half Your Audience Is Not Good Customer Service


I wanted to like this book.  I did like this book. It was in every way the stupid-fun madcap adventure that it promised to be. It is a story told with fanboyish glee where there are superior Earth dimensions that didn't cancel Firefly, survivability is measured in degrees of Bear Grylls, and uninsured Balrogs wreak havok. And all of it led by Tom Stranger, whose M.O. at every turn is Excellent Customer Service at any cost. My inner 13-year-old boy clapped and squeeled throughout this book.  It would have been an easy four or five stars.

Except that the author let his politics creep into the book. Well... creep is the wrong word. He crams it in there like a guy trying to shove a Christmas tree into the back of his Honda Civic. And it pretty much ruined the book for me.

It's remarkably easy to ruin a book. It's a little depressing, actually. You can write 300 pages of an engaging, fun, immersive story and then fuck it up with one page. It goes like this:
Imagine you're at a party and someone wheels out the most lovely cake you've ever seen. As you are admiring it, you notice something and say to the baker, "Wow, that looks amazing. Except... what are those little brown lumps on it?"

The confectionary turds, in this case, are little swipes he takes at liberals. (Note: Not liberal ideas. But Liberals. I'll get to why that distinction matters in a moment) They are done with all the cleverness and nuance of a Fox News-addled uncle at Thanksgiving, and they just don't belong there. There is literally no reason for them. They stick out like... well... A cake turd.


I'm not saying politics has no place in fiction. In fact, fiction gives us a labratory to explore ideas, political or otherwise. But right now, that landscape is a crater-filled hell with danger around every turn and its possible to blunder in without expecting to go there. But this book wasn't supposed to be anywhere near that grim Battlefield of Ideas. It was supposed to be a fun, easy-going adventure where pop-culture refrences abound and we all get to laugh at the absurdity of an insurance agent badass.  Then he calls Obama a Marxist for... whatever reason.   And everyone who wants healthcare is a socialist.  And the main character's cowardly, inept sidekick is a gender studies major who was at Occupy Wallstreet.  And in so doing the wonderfully fantastical world he's created comes crashing down and we are reminded that we live in this shitty one where you can't put your groceries in a paper bag without someone randomly calling you a communist. (This is a thing that actually happened to me.)


You know what, political commentary is a good thing. Expecially political commentary that pokes holes in our own beliefs. Our fractured country would be whole lot better if everyone, especially people on the edges of the political spectrum, could take a minute and laugh at the absurdity of their own beliefs and ideas. Because sometimes the things we believe are kinda stupid when you really think about them. But that trick requires the brilliance and wit of a George Carlin or Bill Hicks.  Not fucking Gallagher.


5. Step One, Target The Belief, Not The Believer


Here's how this works. You hold up an idea. You examine it in detail with your audience and you say, "Look at this idea. Isn't it kinda stupid when you really look at it?" Some people will laugh. Some will get mad. Intelligent people who hold that idea true will, hopefully, take the opportunity to laugh at themselves.

As opposed to what the author does, which is this: "Look at this idea. It's different then mine. I don't like it and everyone who believes it is a stupid, stupid head!"


6. Also Fuck You For Assigning A Political Affiliation To Jayne Cobb


The thing that actually annoyed me the most was implying that Jayne Cobb was a libertarian. Apparently, Adam Baldwin (who voiced the book) does describe himself as such. And that's fine. He can do that. I once identified as libertarian as well.  Then I grew up and became a cynical utopian.

But implying that the fictional character Jayne Cobb would have shared that belief annoys something deep inside me. For a start, our modern poltics have nothing to do with the Firefly universe so don't even attempt to sully it by trying. And second, if I were to put Jayne Cobb on the D&D scale, he'd be somewhere between Chaotic Good and Chaotic Neutral. That is not an alignment where one finds a lot of poltical labels. Jayne Cobb has only one allegiance, and that is to whoever has the most coin.


A quick break from this rant. Adam Baldwin does an amazing job voicing this book, but at some point he is voicing himself as a fictional character who is, in turn, playing a part from a television show that the real Adam Baldwin made famous.

You know what, I hope our Dimentional Insurance Policy is paid up because that level of meta could rip a hole in space-time.


Looking through the Goodreads comments, one thing becomes clear. I'm not the only person who feels this way. In fact you could divide the comments pretty reliably between those who enjoyed the book and those who enjoyed the book but was so annoyed by the ham-handed political commentary that they ended up hating it. And it didn't need to be there. The author did not have to drop a deuce on that cake! Even as I write this I find myself getting angry again. Not about the actual lines that ruined the book but the fact that the book was ruined at all.  It was a lovely cake! Why did he shit on it!


Strangely, I would still recomend this book. It is a fun book! It's funny and stupid and would have been the perfect palate clenser after a heavy read were it not for the cake turds. In fact I have recomended it to friends, but with a caviate. I've told people, "It's a fun book, but you'll have to overlook the fact that the author is an asshole and takes potshots and liberals." And when I watched their eyes I could see the disappointment.

And that's what really killed it for me. Why alienate your audience like that? The only reason I can think of is so you can endear yourself to the braying donkeys who like people who offend for the sake of offense. And maybe you can build an audience off of there. We suffer from no shortage of them.