This Is How Our Story Begins

One of the things that gets me anxious about this book —and there are a few— is where the story starts in the timeline.  To this day, I sort of lament that I didn't get the action started a little sooner in Saturnius Mons, but at least it started on Titan. Templum Veneris begins on Earth and we start to explore the lives of the Human Recconection Project since returning from their last mission.

As I read this again, however, I realize that this is where the story has to begin because Templum Veneris is a totally different animal. In a way, this is my first attempt at a love story. Or, at least, one where romantic love is a major theme. It was important to me to depict Althea and Isra dealing with romance, love, and sex in their own worlds before we transport them to the next one.

Isra is always a hard character to write because she feels things more intensely than anyone else. In a way, it's her superpower to read and predict how people are going to react. She has a level of empathy and emotional intuition that far surpasses the rest of the team. But she feels that she can't show it. So when writing Isra, there are always multiple layers to her words and actions which, you know, gets a bit tricky.

In this scene with Joseph, Isra rejects his rather clumsy advances because she feels that love, especially romantic love, is a luxury she just can't afford. Especially right now when she is trying to prove herself and get back into the good graces of the Ministry. But I also try to hint that there is something deeper that maybe Isra can't see at the moment. Because love is also about power and for very good reasons, she's not giving any of hers over to anyone.

Then there is Althea.

Every once in awhile in the last book, I'd drop a hint about who Althea was and what she was like. I'm pretty sure people had a good idea by the end it, but this is the reveal for those that didn't totally understand. Or for those that read the first book over a year ago and don't remember. Stalking her prey through the streets of Arkester, I wanted to show that Althea uses love and romance like a tool. As we are about to see, it's kind of her all-purpose lock-pick kit. Or, even more accurately, its a form of currency.

In that way, she is in the same frame of mind as Isra. She also doesn't feel that a healthy romantic relationship is something she can afford either. The difference is that Althea is compelled by an addiction. So a healthy relationship for her would be like a drug addict with money saved up; the two just cant co-exist and for similar reasons.

So that's the starting spot for two of the characters. Isra and Althea are so alike they are almost two sides of the same coin. I think people, deep down, are motivated by a sense of completeness. And part of that, for most people, is a healthy romantic relationship. But for Isra or Althea to obtain that, they would have to give up something of themselves that they are unwilling to at this point. Either because, in the case of Isra, it would take drive and focus away from her career goals. Or, in the case of Althea, because she lives for that rush; that next high.

And that's where Templum Veneris begins. 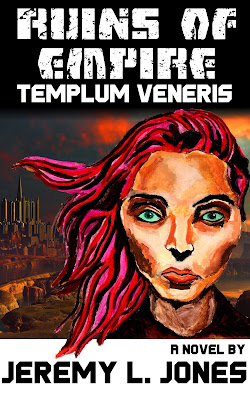