The Chapter Where Viekko And Althea Fight The Entire Time

Maybe it's a bit much, but Viekko and Althea have a lot to hash out before they are thrown into this shitstorm and right now is the best time to get it out in the open. And I think Viekko understands that on some level which is why he pushes like he does.


Really, this is the info dump chapter where I set up what is about to happen on Venus and make it interesting. And I think I accomplish this by simply putting these volatile personalities in a room and letting them bounce off each other like ping-pong balls in an enclosure.

But, first, a few notes about Venus.

Clearly, none of this is remotely feasible without some unknown technology and a nearly infinite power source. If you were somehow transported to the surface of Venus, you would be instantly crushed by the atmospheric pressure, broiled by the 600+ degree heat, suffocated by the CO2 rich atmosphere, have your skin melted off by sulfuric acid and maybe, if your lucky, get stuck in a molten metal rainstorm.

So to those people who will email me explaining in hyper-ventilating geek self-righteousness, yes I understand the premise isn't possible. But as I mentioned in this author commentary piece for chapter 4 of Saturnius Mons, I really wasn't going for hard science fiction. I wanted to tell the story of the fall of the New Roman Empire.  In space. So I did.

But there are a few islands of truth in this sea of Bullshit I Made Up. First, there really is a spot high in Venus' clouds where the temperature and pressure would be remarkably earth-like.  If one could guide an airship there, one could conceivably walk outside.  Okay, you would still need a respirator in order to breathe. And you'd need some sort of protection to keep the acid from melting your skin off.

Venus is a terrible place.

The other thing I kept from the real planet is the fact that it has a strange rotation. As near as we can tell, something probably smashed into Venus during the chaotic period in the solar system known as the Great Bombardment. This was the magical period when bits of rock were slamming into each other destroying planets and creating new ones. In the end, Venus ended up rotating the wrong way (The sun rises in the west and sets in the east) and a year takes less time than a day.

But we will get there soon enough. 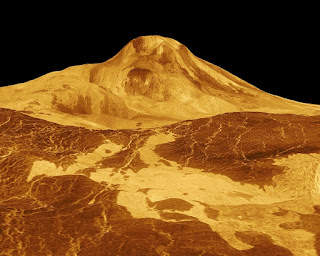 So with the mission parameters in place we look back and Althea and Viekko. By the end of this chapter, I think they are just stuck. They are starting to realize that their entire relationship is based around the time when they were both at their lowest point and they are both trying to figure out if this thing between them is real or if it's just a product of their respective demons. And they are left to wonder if trying to be together is just more self-destructive behavior.