Editors Note: This is the last installment of a series where one of the main characters of my books reviews my favorite books this year. The opinions expressed herein are those of Viekko Spade and are not necessarily shared by Jeremy L. Jones or Saga of Insanity.

Well, this is it. Thank you to everyone who sat down for a while to... I don't know, listen to me talk about stories. But you know, stories are all we have really. Both the real ones and the fake ones. The ones that we tell ourselves and the ones we tell others. It's the way we put a chaotic Universe in some sort of perspective, assignin' order to...

Nevermind me; I'm ramblin', I guess.

Jeremy will be back next week to keep ranting about books, his and those he stumbles across. Probably some other things too.  At least he'll probably be back. Haven't seen him for a few days.

So in this book, there’s this computer virus. Only humans can get it too. Like if you tune a radio to that spot in between frequencies, you can get this random static. Cronus tells me you run that signal through a video converter, and you get this flurry of white that looks a bit like snow. Well, that’s apparently what your mind sees when this virus hits you.  Also, strangely, what my mind felt like after reading this book.  You got this sword wielding hacker, a sassy little girl some bad guy that seems to be built out of nothing but muscle and anger. (He’s got a nuke by the way.) Throw in some ancient Babylonian myth, a virtual world and a real world that’s gone and sold itself to various corporations (that part sounds familiar) mix ‘em all together, and you get Snow Crash. Not sure what I think about this book. It’s like the guy who wrote it threw everything he could think of in a mixer and turned that sucker up to ten. It makes just enough sense to pick out a sorta-kinda story, but it will leave you dizzy if you let it.

I guess I liked it well enough. But I'd have to go back and read it again to try and figure out where all the pieces and parts fit together. Which means I'd have to subject myself to this weird world again and... and you know what? I'm good.

I guess if you are a writer, this might be your thing. This guy Steven King seems to think he’s a writer. Must have been a big deal a thousand years ago but, I ain't never heard of him. Some good ideas. Some stuff about his life that made me laugh. A good story about how a guy came from nothin' and made a life for himself as well as a few tips on how other people might do it too. I ain't ever been much for writin' though. See the problem with writin' stuff down is that people know exactly what you said and then they got proof that you said it.

Too much trouble if you ask me.

Jeremy's Review of On Writing 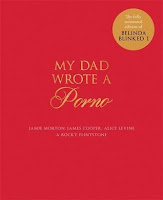 For the love of the Gods of the Endless Copper Skies, keep this the khayakh away from Cronus. He don’t know any better and, he might actually think this is how people shuvuud in the real world. He’s just dumb enough to try. I pity the poor girl… or whoever else he happens to.

So apparently this guy’s dad went and wrote a filthy book. And then, for reasons that escape me, he shared it with his son. And if that weren’t nokhoi baas crazy enough, the son went and shared it with his friends and, eventually, the entire world. And, I gotta say it made me laugh so hard it hurt a little. The book is basically presented as a critique of some great work of literature… except the ‘great literature’ in question might be the most horrible sex book ever crafted by man or woman.

I can’t imagine my dad writing something like this. I mean, growing up on a farm, sex is just one of the many things that happen. We don’t think much about it. We don't talk much about it. All my dad did was pull me aside when I got to a certain age and made sure I knew what went where and what can happen if it does. Pretty comprehensive. Man, if I go back home and my dad tells me he went and wrote a whole book about sex, I’m leavin. As far as I can get. I don’t know if they got places outside the solar system but I might look into it.

This was the first book in that fantasy series I talked about last week. Liked this one better. In Clash of Kings, there was a lot goin’ on and, not much of it seemed to matter much. I mean it all needed to happen, you don’t get to where you’re goin by cutting out the middle, but still. This is the begining. Where the story takes off.

And it mostly follows the Starks who, yeah, I can get behind that family. They got old-school Martian ways about them. They are hard and strong and, they are as bendable as a block of iron. It gets them into trouble though. Makes you realize that those ideals like honor, duty, devotion and, kindness, they are important but, holding on to 'em will get you killed.

But on that note, so will being a crazed, murderous khoyor mogoin khuked. Lots of ways to die in this world and, I think this book covers most of them.

Jeremy's Review of A Game of Thrones 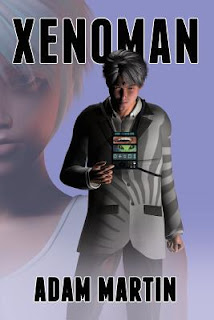 
What the baas did I just read?

This book was a lot like Snow Crash, only it made even less sense. It’s got this guy Xeno who’s wandering through this commercial hellscape tryin' to find a cure for some drug that’s makin' people explode. And along the way, there’s crazed pop stars and love-sick video avatars, sentient flowerpots… I remember this old story my mama told me about a girl who falls down a rabbit hole and runs into all manner of screwed up creatures. Yeah, it’s like that but without any sense holdin' it together.

All I can say is that there’s somethin’ wrong with Jeremy. I mean there was some good books on this list, some okay books, and some weird books and then there was Xenoman.

Can’t say I would read it again. Don’t know how I read it the first time and I don’t know how it got the top spot on this list. But if you’re so inclined, go read it. See if it makes any more sense to you.

Well, that’s it. The end of the list. Don’t rightly know how to end this. Probably should end with remindin' everyone readin' this that you can follow me and the rest of my team. Jeremy went and wrote books about our adventures, and you can find them here and here.

Though given what I now know about his inspirations, I have some serious reservations about how my story is bein' told. I don’t think I’m allowed to read 'em, though. Might rip space-time or somethin' like that.

But you all should. And then let me know if there’s somethin' I should be worried about.
Labels: 2019 Year In Review Authors Commentary Book Review Year End Review