9 Things About I Am Marcus Fox

A boy raised by the most notorious gangsters in American history.

The greatest hunter who ever lived.

A vigilante running from his own past.

Is it a dream or is it real?

Who is Marcus Fox? 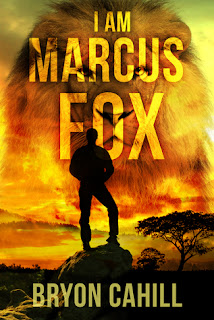 1. If you believe what you read, this book is kinda stupid and batshit insane.

Stupid because there is no overarching goal. Marcus is never on any of quest nor is he, until the very end, pursuing any goal of any kind. He's just there and the world happens to him. There are elements of The Hero's Journey but it's chaotic, unfocused, and never settles into any kind of satisfying narrative.

And insane because there is a lot of shit that doesn't make any sense.

2. Suspend Your Disbelief Across An Ocean

Take this example, the first third of the book is about him growing up in the Zambian Savanah... or jungle, it's hard to tell sometimes. There he fights giant three-toed sloths (they live in South America), elephant bumblebees (not a thing) and prattlesnakes (can't tell if this is a typo or if there is a species of snake that just can't get to the point).

It's not just Fox's adventures in Africa. None of this book stands up well under the slightest scrutiny. Even those willing to stretch their suspension their disbelief will find this a hard chasm to cross.

3. No Pot of Gold At The End Of This Rainbow

And even for a reader that is willing to forgive the inaccuracies in the story, nature, engineering, and physics, there is no ending there to reward their efforts.  The story just terminates. The words stop being written and the reader is left to check to make sure that they don't have a book with some missing pages.

About a third to halfway into the book, the author drops some hints to suggest that none of this is as it seems. The story is told to us by Marcus Fox himself and we are left to wonder if he's giving us the whole story, or any part of the story for that matter. It becomes clear that Fox's grasp on reality is tenuous at best, and he is self-aggrandizing to the point of delusion.

Once I figured this out, everything changed.

If, indeed, we are working with an unreliable narrator, then this book becomes an exercise in trying to figure out what the truth really is. It is up to the reader to determine what parts of Marcus' tale are true... or based in truth, and which were completely made up by a lunatic.

I have my own theories but, bottom line, it's up to the reader to figure this out.

So its like this: Marcus actually was raised by notorious criminals and was a 'hostage' in the standoff. But every memory between that and waking up in the hospital is false. There is not telling what he actually was doing but he never went to Africa, nor did he ever become a strange vigilante with Charlie. He actually was in a mental institution but how he escaped is either a lie or a false memory. There is no Charlie, there is no Terence they are both products of some dissociative disorder (as evidenced by the fact that they don't tend to interact with anyone else) but he actually does break into the zoo and confront the woman who I assume is his mother? That's the best I got.

6. Nothing Behind The Curtain

I will say this, and this is less a spoiler and more of a warning. There are no answers by the end of this book. If, indeed, parts of this story are completely dreamed up, then the author has yet to make that clear. There is no big reveal that makes the whole story make sense. There is no moment where Marcus realizes that he might very well be nuttier than squirrel shit. The book just ends and the reader is left screaming, "What the figgity fuck did I just read!?"

I will say two things for sure. First, this might be part of a series. The listings on Goodreads and Amazon don't make this clear but the book itself calls 'I Am Marcus Fox: Lost Identity Book #1'. That seems to suggest there is more to the story.

So if there is another book and, at some point, the author manages to tie all of this together in a way that weaves together fantasy and reality into a narrative that makes sense, then this book is brilliant on the level of Franz Kafka or William S. Burroughs.

Hell, even if the author meant to do what I think he's trying to do, its strangely brilliant if not terribly well executed.

8. You Can't Argue With The Result:

In any case, the book was entertaining. Maybe the author has outsmarted me and I can't really comprehend what I am reading. Maybe I'm looking for something that isn't there; trying to find meaning in, what is essentially, the narrative version of word salad.

But it was fun to figure out.

If there is an answer to my questions, they exist in a book that is not published yet. So my review is based completely on entertainment value along with the hope that we haven't heard the entire story of Marcus Fox yet.

It was fun and it kept me guessing at every turn. So, until, Lost Identity Book #2 comes out, we are left to guess.