8 Things About The Huralon Incident

It was supposed to be a simple mission. Evander McCray and his crew have taken the newly-christened warship Springbok out to hunt down a pirate that’s been plaguing the Huralon system.

But when he captures the cunning and cruel Mallouk, McCray accidentally triggers a political firestorm that threatens to cost the lives and freedom of the entire population of Huralon. Now McCray must fight for his own life and that of his crew while Mallouk launches a propaganda campaign for Huralon to succeed from Elysium and join the theocratic, authoritarian Democratic Peoples of Madakal. 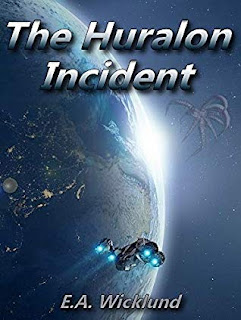 According to his Goodreads profile, E.A. Wicklund is a military historian and it shows. He writes about the technology and tactics of space battles with a level of detail that could make a reader forget that it's all happening in a fictional world. If anything, I think he could pull back on that just a smidge; I feel he gets slightly lost describing fictional physics. But, overall, he paints an amazingly detailed, well-thought-out vision of distant future military operations.

There are a couple of little details I really love. You know how there's no sound in space? Which means any movie that depicts explosions in a vacuum is adding that for effect? He gets around that by simply having the AI of the warship inject those sounds for the crew?  Why? Well, for the same reason the movies do it, so it seems more 'real' to our human senses.

You know how high powered lasers used for battle would probably be so energetic that they would exist beyond the visible spectrum? No? Oh... well that's a thing. Anyhoo... Wicklund gets around that with a similar strategy.

Taking those little issues about physics into consideration and coming up with solutions for them that work... well, maybe I'm a geek (shocker, I know) but it makes my pedantic heart happy.

One of the things that sci-fi and fantasy have the ability to do is take thorny issues regarding race, religion, politics and other issues that are likely to generate a lot of strong opinions, and pull them out of our world. When they are placed in a new setting outside our preconceived biases, it has the ability to display current issues in a new light.

4. What issues exactly?
Well, let me put it this way. Elysium is a society built on a foundation of free expression and thought. But it is still run by humans and so a neighboring ethnic and religious group, the Madakal, are often seen as oppressed by a larger majority. Except the Madakal government is actually an oppressive theocratic authoritarian state that is actively using free expression to try and crush it in the Elysian planet, Huralon and uses feelings of guilt and counter-culture rage to fuel its campaign effectively turning free expression against itself.

Sound at all familiar? Even a little bit?

5. The Forgotten Art Of Subtlety

The thing about political commentary in novels is that it has to be done with some finesse. If you try and beat people over the head with it, you risk becoming preachy at best. At worst, you can alienate about half your audience.

But Wicklund manages to avoid either of those pitfalls. For people like me who are interested and concerned about how totalitarian regimes can exploit societies that value free expression, this novel provides something extra to think about.

For those that just want space explosions, big guns and a roller-coaster thrill ride, you can just enjoy the story.

And if you do want to see it, it's just an idea. Agree with him or not, but it's an idea. Go ahead. Pick it up. It's yours to take with you if you want it.

Even looking outside current events, one has to appreciate the universal theme presented in this book. You got McCray, the honest man fighting for deeply held principals. Those principals get him in trouble as often as not, but his sincerity is genuine. And then there is Mallouk and the rest of the Madakal Elites. These are a group of people who cruelly oppress their people while growing fat off their labor and treating them like shit all while trying to use the goodwill of others against them.

It's one of those ideas that pops up constantly. Why? Well, because it's how humans work.

The only other criticism that I have is that the Madakalian Elites come across as almost comically evil without any redeeming qualities. While I like bad people who do bad things (I mean, who doesn't. ....In fiction that is.) I prefer a touch of nuance. Most people don't actually believe they are evil even when they are in the middle of being the evilest, evils who ever eviled an evil.

Fans of political thrillers, hard-ish sci-fi, space battles, intrigue and military fiction will all find something to like in this book. But the characters are engaging enough, and the story is well-written enough that I feel a wide range of readers would find something to dig about this book.
Labels: Book Review Five Star Indie Author