A natural disaster leaves teenage sisters Quinn and Riley isolated and struggling to survive an increasingly hostile environment alone. Humankind’s greed and apathy have left the world a turbulent and dangerous place to live.

But things get worse when Quinn’s sister goes missing. And now she must gauge who to trust in a world where life is cheap and make her way in a dying world where if crazed survivors don't kill you, Nature will. 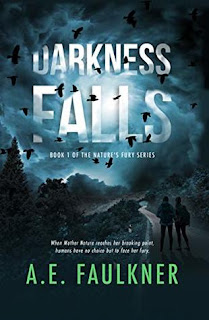 1. Just the Kind of Thrill Ride One Expects:

This book is a pretty standard natural disaster / apocalyptic survival thriller. If you're looking for teens trying to scrape together food and shelter in a post-civilization hellscape, this book will appeal to you. It's got a cast of interesting, three-dimensional characters, twists around every corner, a breakneck pace, and that out-of-control-rollercoaster feel.

The most well-done aspect of this book is the pacing. It's a page-turner which, again, is what one expects in a book like this. At the same time, it takes enough breaks from the action so that the story can breathe and the characters have a moment to fully develop. And then, just when everything is kinda-sorta okay, BOOM! Shit hits the fan, and everything is awful again!

In addition, the writer has a keen sense of when to throw another twist in the story to keep the reader off-balance and turning pages.

The author has, as well, done an excellent job of crafting a group of dynamic, realistic characters. The main character, Quinn, especially comes off as sincere and fully-realized. On one side, she is just an average teenage girl caught in spectacular situations. But, at the same time, she has unique traits, clear motivations, dubious decision-making skills... all the good stuff.

So it's like this, Quinn and her sister Riley begin the story holed up in a trailer after an earthquake hit while they were on the road. The wreck killed their parents and somehow cuts them off from the rest of the world (no indication why). All of this happens before the book begins, and we are left trying to figure out what is happening.

There is this maxim going around these days, "Start as far into the story as you can." Authors of thrillers, in particular, have taken this to an extreme starting their books right in the middle of a fight or having their characters literally hanging off a cliff in the first few seconds.

Its good advice and, for those writing thrillers, important advice. The last thing a thriller should be is boring.

But in this case, the idea has been taken too far. We missed the inciting incident, and the story has to constantly go back and reference the event that brought Quinn and her sister into this situation, but, in my opinion, I would have much rather have had that happen on camera.

I don't know why this movie came to mind, but imagine if the first shot of Independence Day was Will Smith dragging an alien body through the desert.

5. A Disaster Story Without The Disaster:

Because the book pretty much skipped the big disaster sequence, we are left without a good idea of what is actually happening.

There's an earthquake, that's pretty clear. Although the extent of the damage is hard to parse out. For example, it seems that all the roads are closed, but I'm not sure how an earthquake would have caused that. (I can guess how an earthquake could cause that, but it's never brought up specifically)

Also, there is a fracking disaster, but, again, it's hard to pinpoint what exactly happened and how bad it is. This is affecting the weather. Nobody knows why.

Most of the book has a zombie movie feel to it. Most people are just gone without a good explanation. The book implies that most people were evacuated, but evacuation should include emergency personnel, and the military and national guard; all of whom are missing for this book.

About halfway in, we start to run into survivors (with predictably nasty results). But one is still left with the question, where are the cops, the firefighters, the military, the FEAKING COAST GUARD if nothing else.

I get that during a major natural disaster those systems can fail spectacularly (ask anyone who lived in New Orleans in 2005). But, again, there's no good explanation here. They are just not there.

This book is part of a series, and I get that the author wants to leave her audience hanging because... well, that's how you sell a sequel, isn't it? It's an option anyway.

That being said, I felt a little cheated. Yes, the primary conflict was resolved (sorta), but it felt abrupt. Again, since I'm using Independence Day as an example (still don't know why, it's just where my brain went) it would be like if the movie cut from Smith and Jeff Goldblum walking away from the wreck directly to the report that a second ship had appeared behind the moon. Then credits.

Which is, come to think of it, not much worse than the way the movie actually ended, but I stand by my point.

Despite the issues, I found myself wanting to continue this series. Mostly because the characters Faulkner has created have a way of pulling the reader along with them. If I had to pick a word for what that quality is, I'd say sincerity. There is something earnest in the way her characters make their way through the world that's endearing.

This book is... well.... bookended with problems, but it was an entertaining thrill ride that I find myself wanting to continue. It's a fun YA thriller and, given the current trend in the genre's, I think most people will forgive the abrupt beginning and end.