9 Thoughts About Saved In Time

When Trevor finds a Time scope, a television-like device that can see through time, his life as a layabout, quirky inventor gets some direction. After trying to use the device to clear the name of the honorable senator Gordon Hoskins from a supposed relationship with mob boss Joe Petuccini he stumbles upon the dictatorial ambitions of Senator Bradley.

As he tries to keep Bradley from becoming the next President, Trevor finds hidden secrets about the origins of the Time Scope and the implications could affect the entire human race across the galaxy. 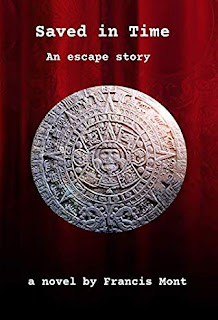 1. This book is about time travel right?

What would you do if you had a device that could see through time? Honestly, I get positively giddy at the idea but, then again, I am a total history nerd. But off the top of my head, I would go back to an ancient battle and see exactly what it was like. I would want to see exactly what the historical Jesus Christ was like. I would want to see countless historical mysteries play out: the Kennedy Assassination, D.B. Cooper, the Roanoke Colonist, the Hanging Gardens of Babylon, the Sea People, Jack the Ripper, the Arc of the Covenant the life and death of Gengis Khan… the list goes on and on.

2. Oh, you want to start a detective agency? That's cool too.

Really the only function that the Time Scope has in this story is as an omnipotent spy camera.  Which... okay. That seems like amazing technology being used for a questionably benign purpose but let's go with it.

So Trevor uses the device to spy on Senator Bradly. Bradley in this book is openly saying horribly racist things and flat out says that he wants to start a global war for conquest. In order to stop Bradley's mad ambitions, Trevor, Hoskins, and Petuccini get together to come up with a plan to stop him. They use the Time Scope to spy on him at home and find him in some sort of secret Nazi room wearing a Nazi uniform and saluting a picture of Hitler.

4. It turns out Bradley is a Nazi:

Spoiler alert. But not really. This happens in the first third of the book and, ya know, it's pretty obvious.

5. A Cast of Caricatures

I mention the complete lack of subtly or nuance above because it pervades the entire book.
There's something very 'tropy' about every one of the characters. There's our 'hero' Trevor who is every bit the bumbling, happless, tinkering nerd sterotype.

Senator Hoskins who is the 'good' senator. You can tell because he told us so.

Senator Bradly who is a nazi. (And who, sadly enough, was the most realistic character in the book given how political things are right now.)

Joe Petuccini who is the criminal mob boss... except he never actually does any crimes. Nor is he connected with a mafia family.  To be honest I'm not sure why he's even portrayed as having connections to the mob.


6. And Then There Is Atlantis:


About halfway into the book, we are introduced to Atlantis. It is a world... somewhere... where an advanced society discovers Earth and the horrors we are visiting upon ourselves. And, being the super-advanced race, decide to fix Earthlings for their own good.

The author makes some valid points about how democracies can degrade and slide into authoritarianism. Although, again, the story lacks any subtly or nuance in making that point... yeah, fair enough.

Where it goes off the rails is the idea that what the world really needs is an elite group of highly educated people to come in and fix the dumber people for their own good. Which...

If one could assign a cause to the recent slide toward right-wing populism its because of this attitude. 'The elites' didn't become a dirty word because everything was going so well that the people had enough.

I like weird shit and this book had a lot of it. It was sometimes funny (probably unintentionally so) always weird and, despite a lot of flaws, was oddly charming. I wouldn't recommend to someone interested in time travel fiction or political commentary. But if you're feeling in the mood for a book version of 'Plan 9' or 'The Room' give this one a look-see.