Where Jeremy Has To Write About Giving Birth

In retrospect, it's amazing how hard I worked to keep from writing a birth scene in this book. In previous drafts, I mused about strange, primitive hospitals where this scene could happen off-camera. I had Althea oddly stalking random women in the city before that became clearly awkward. I tried to skip it entirely but none of it worked. So it came to this:


Thinking back I have to laugh about how hard I tried to avoid it and I'm not sure why. Well, that's a lie. I know exactly why and the reasons are as follows:

#1: I'm a dude without kids.
So I've never even been in the room while it was happening. Nevermind participating in any way. Prior to writing this scene, my entire experience came from anecdotal evidence and movies. And I really don't need my profound ignorance being enshrined in print for all time.

#2: Births are gross:
Even the most body-positive person has got to grudgingly accept this. When a human comes out of another human, it gets messy. There's blood, shit and all sorts of strange fluids shooting across the room. Not to mention the part where a human rips its way out of another human. Hella alien-style. It doesn't strike me as something terribly pleasant thing to read.

#3: I'm Awkward Enough, Thanks.
This is somewhat related to #1, but without any real-life experience, I worried that it would be painfully obvious that I didn't know what I was talking about. You ever read a book (usually by a dude) and when they get to a sex scene it becomes SUPER OBVIOUS that they are uncomfortable with anything sexual? I have read a few of these books and they range from the hilarious to cringe-worthy.

So I danced around the scene for two drafts. Althea either showed up after the baby was born or she was in a hospital where all the gross, dirty things were happening off-camera or I skipped it entirely and went right to the next scene.

The thing was is that there was something missing and I knew it. There was this giant hole in the narrative and next to that hole there might as well have been a sign that read, "The author doesn't want to describe what birth is like. Please move along."

In other words, I was being that guy.

I am pretty clearly fine describing violent scenes. I seem to have no problem with gunshots, stab wounds or anything else. I have graphically described bodies burned in a pile as well as the aftermath of a battle.

It was painfully obvious so I had to pull on my big girl panties and get to work.

I had to write this scene from Althea's point of view and she would be acting as a midwife. So I went looking for documents. On a related note, given the weird things I look up on a daily basis, I'm really curious how 'How to be a midwife' looked on my Google search list. It probably appears somewhere between 'how much does a head wound bleed' and 'how to pick a lock'.

But I did find some documents from the WHO that would, at least, give me some basic medical knowledge. After a couple of days reading along with some articles on how births were done in the ancient world (I immediately gravitated to the process used by the Ancient Egyptians for some reason) 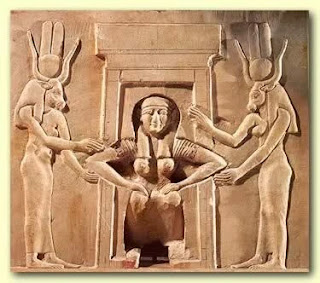 I am also lucky enough to have a family member that works as a PA who is willing to read over my work and act as an expert advisor. It's strangely intimidating to send a fictional written description of a birth to one's sister-in-law, especially when she works in the medical field and has three kids, but she was very helpful and helped me make some corrections to keep from looking too stupid.

Reading it again, I think the scene works. It's a frank description of daily life in a bronze-age society. Plus I just like the tension that builds in the scene. Althea is so gloriously out of her element that it's almost painfully obvious that she doesn't belong. And yet she pulls it off. Or does she?