8 Thoughts about She Who Comes Forth

France Lighton arrives in Luxor, looking for adventure in the archeological digs of Ancient Egypt. What she finds is a life of busy-work, drudgery, and a few leering eyes from her male colleagues.

But when a mysterious stranger arrives, Lighton finds herself thrust into an ancient mystery that will rewrite history in the land of the pharaohs. 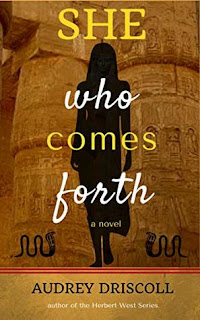 This is going to sound weird, or like a back-handed handed compliment, but I don't know a better way to say it.  So here it goes:

Despite having a lot of elements that normally irritate me, I like this book a lot. I really got into it in a way that was almost confusing to me.

France comes to Egypt with two possessions of note. Her emerald ring and her cello, both family heirlooms that she treasures. But the cello threw me at first as France treats it, and it acts like a character in its own right. I'm a musician and personifying one's instrument sorta makes sense, but, still, this seemed over the top and downright silly at first.

Except, it started to work. It spoke to France's loneliness in this strange world and, later, gave her an element of the supernatural. Which, in a story where there is ancient magic flickering in the background, added gravitas to the main character. I sometimes wonder in stories why a certain person was 'chosen' to be the hero of a particular tale, but, for France, it feels like destiny.

Ugg... I hate this trope. It's common in the romance genre, which is just one of the thousands of reasons I avoid it. And when it sneaks its way into a book I'm reading, I get the overwhelming urge to throw it across the room.

Especially if the mysterious stranger in question is also rich?  Book? Meet wall.  At high velocity.

And I admit, the old pitching arm started a twitchin' when Adam Dexter entered the story.  But... again, it started to work. The romantic angle helped pull the main character deeper into the story. And it added some depth to the character. It turns out that France, like most of us, loses her senses when sex enters the picture. But she's got enough presence of mind to break free and start poking at all the right holes... ... ...

That's what she said. BOOM!

A rule of thumb, if I'm past the halfway point and a real plot has yet to develop, I've already lost interest. I'm all for stories with a slow build, but there is a limit.

And that's not to say there was no plot in the first half of this book. There was a story, but it was mostly following France around Egypt as she tried to get her bearings.

But, again, it worked. And it worked because the author went to great lengths to create an immersive experience. They way she describes this time and place almost feels as if the author, herself, had lived it. (Apparently, she's never been to Luxor. Not in the 1960s. Not ever. Which is even more impressive to me.)

Maybe it's because she is describing a world that is interesting to me —I do love me some ancient Egypt— but it worked. Or, at least, I was willing to sit back and let her weave the world together before it was time for shit to get real. The sights, the sounds, the local color, and the mythology and magic of Egypt really captured my attention.


5. Irritation #4: The hell does this have to do with the Cuban Missle Crisis:

Okay, this is one flaw that did stand out. So this story takes place during the Cuban Missle Crisis. It's a thing that is mentioned happening in the background. The dangers of nuclear armageddon are sorta...kinda... a theme sometimes. And I feel like the author was trying to weave these two worlds together, but that just didn't come together for me. I felt like it was a distraction that could have been left out.

No! And that's my long rambling point. Looking back, I was looking through my notes, and I noticed a pattern. I would note something that normally irritated me only to find, a few pages later, that it no longer did. It made the story work, and that, above all, is the most important.

The other thing I want to point out is that the above 'flaws' are mostly a matter of taste. I don't like the dark, mysterious, stranger trope but go surf the Amazon romance section, and you begin to realize that, not only do people like it, I think it's a multi-million dollar industry.

I gravitate toward punchy, gripping stories, but I have seen many a lament on Twitter's #writingcommunity about people wanting low-stakes immersive stories. No real plot, just a pretty picture. Don't understand that, but whatever.

The book still held my attention, so it occurs to me that a less bitchy reader would cruise through this book with nary a care in the world.

I liked it overall. It was well written, and this particular time and place in history were painted with vivid colors. Most of the things that threw me for a moment were matters of personal preference which says to me that others would plow through this book without a care. If you're liking an Indiana-Jones-ish adventure with a hint of mid-century romance and spiced with a little ancient magic, this book is a good choice.