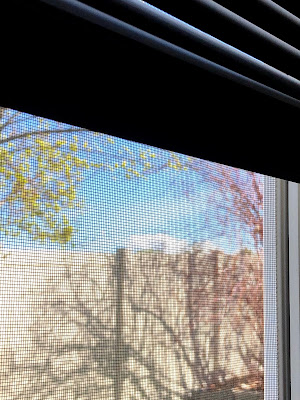 I wonder if this is what it felt like for people living during WWI and WWII. Not for the soldiers obviously, but for the hundreds of thousands left at home and trying to continue daily life knowing that the world would fundamentally change.

This weekend was much like any other. It's spring here and I ventured outside to start building a garden space in my yard. There in the sun with music on the speakers and my hands in the dirt, I had to remind myself that beyond the fence, strange things were happening.  This is history happening and we all are living through it.

That realization manifests in strange ways. At one point I sat down next to a tree for a little break and stared up at the sky. I realized that there were no planes. Not a single one. The Boise airport is not far from me it's not unusual to see commercial airplanes coming and going.  Or hell, just crossing the airspace at 60,000 feet or wherever they fly normally. I wondered if, back when things were normal, I could look up for any length of time and not see an airplane.

There was not a single one that day. In fact, I glanced up several times while I worked and never saw a single one.

Going shopping, especially grocery shopping is a strangely awkward affair. We watch each other with suspicion and we keep our distance. We wait for people to get to the end of the aisle before we turn in. A stranger and I stood and waited while some guy, who seemed to be totally oblivious to the world around him, browsed the shelves as if this were a few months ago.

There was something very real that wanted to scream, "Fuckface! The rules have changed! Get your shit and get the fuck out!"

That reaction is probably not productive.

I wait. So does the stranger. And when the 'fuckface' in question finally done figuring out what he wants, me and the stranger negotiate a path around each other. She wants something on the shelf about where I am standing, I am trying to get to the other end. I have to break the sacred 6' space for a split second. I actually caught myself holding my breath as I rushed past as if the very air around this person was enough to infect me.

A lot of people started wearing masks but I haven't yet. It's the CDC recommendation but it doesn't make sense to me. The information we got earlier told us that face masks really don't do much to protect the wearer, rather they are to protect other people from the wearer.

I don't wear a mask at home and, really if I'm not going to great lengths to protect my wife from whatever I might be carrying at the moment, I could give a shit about the rest of you. I mean, no offense, but I like her more than you.  And plus it feels like giving into the Fear.

The Fear is what will destroy us. So I give it roughly the same berth as I give the people at the grocery store.

But that's part of the problem. We live in a post-truth world which was at worst frustrating and, at best, amusing when we were worried about whether or not the idiot President actually said the thing that he totally said on camera. But the stakes are real now. Was the information I was given back then a reflection of reality? Did something change? Is what I am being told now the truth?


It's a strange time to live through so it's probably not a surprise that I wanted to document it. Because this is history and history should be documented. Who knows, maybe I break through, achieve some sort of fame for my writing and these little rants become interesting to people looking for insight into the world during the 2020 pandemic.  Maybe it's just for my kid's or grandkid's history project. Or maybe just for me to look back and go, "Wow. Those were some fucked up times, right?"

Working in my garden felt the same. The trees were blooming. The garbage collectors picked up trash and the busy road on the other side of the fence still rumbled, hummed and occasionaly roared with vehicles. But it was noticably quieter.

And there were no planes.