Jeremy Discusses Story Structure or How Viekko Ruined Everything

Spoiler alert. Or maybe not. But things start going a little pear-shaped in this chapter.

I've described my story structure before. It's basically a three-act structure because, let's face it, hundreds and hundreds of movies can't be completely wrong. But mine has a certain emphasis... 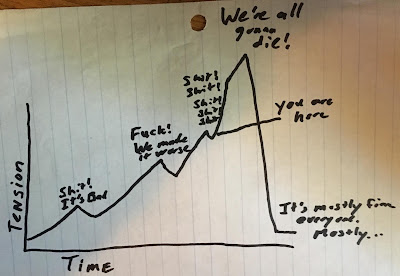 And yes, it's basically a three-act structure but with different and more ostentatiously profane expletives for the acts. But, in a way, that reflects how I think about a story as I'm putting it together. Not only does one disaster inevitably led to another, but I also want the characters to be somehow (however unwittingly) responsible for shit getting worse.

Let's take Viekko's story arch since that is the thing that is sending this particular story careening off the rails:

'Shit It's Bad':
That moment was right at the beginning when Althea arrived after her job wishing to... ahem... celebrate and the rejection that soon followed. This was simply the situation at the time. Viekko didn't really ask for this, but how he responded definitely makes things worse. Which brings us to...

Fuck! We Made It Worse:
So Viekko is depressed and angry. He feels a little used and discarded. As anyone who's felt that way knows, this is not a good headspace for good decisions and when it comes to Gabriel's challenge at the Provacao, I think that becomes pretty clear. Would Viekko have caved to Gabriel's goading if Althea hadn't just kicked him to the curb? Hard to say. It is Viekko and he does have a strange sense of honor about him. On the other hand, I don't think he often feels the need to prove himself. But the fact that Althea did just bruise his ego a little, well, It made it an inevitability.

SHIT SHIT SHIT SHIT!:
That brings us to the current scene. Since the 'Fuck, We Made It Worse' things have been getting... well, worse. Viekko has become entranced by the Cythereans and more distant from Althea. And he senses this by the time he goes on patrol for the last time. I don't know if he truly understands his situation but he knows it isn't good. And when he sees the harsh brutality of the Cythereans... well, he does what Viekko does. Something immensely stupid to make it worse.

We're All Gonna Die:
Well, we are not there yet so I will just say this. Shit gets worse before it gets better.

It's Mostly Fine Everybody... Mostly...:
Which will bring us to the conclusion however that ends up. If you read and/or listened to Saturnius Mons, you probably know that I'm not one for cute, tidy little endings. Again the line from the musical version of Buffy the Vampire Slayer always comes to mind when I am thinking of endings:

"The battle's done,
And we kind of won
So we sound a victory cheer.
Where do we go from here?"