8 Things About Me And The Robot

Humans have colonized the stars, harnessed the power of FTL travel, and given birth to AI. And in this world, the envoy to Earth's breadbasket, Eden has been sent to improve food production to feed a starving world.

And in the process, he helps create the most powerful AI yet developed. But can it be trusted? Does trust even factor into a world of perfect logic? 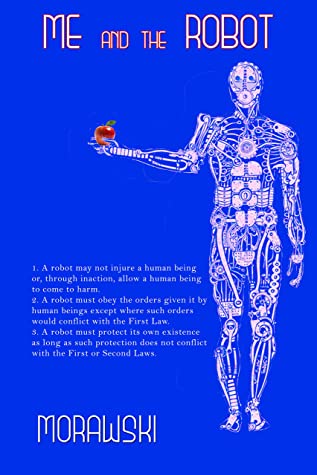 The thing I did enjoy is the fact that the book goes out and tries to discuss some of the big questions when it comes to artificial intelligence and, indeed, where civilization will go in the future. Along with that some compelling universal questions about the nature of consciousness and what it means to be human. These are the questions I find fascinating myself and love the answers no matter how many times they are asked.

2. Welcome To The House Of Pain:

The set up is awesome. Without going into it too far, the FTL travel we've developed is deadly to most life and, even those who survive it, feel the most intense pain imaginable. We join our main character, Ski, during one of these travels. Furthermore, nobody has survived more than nine trips through the 'Passage'. So you have this intense, eerie set up right from the get-go.

Unfortunately, things fall apart fairly quickly after this. The story veers from one situation to the next with very little connecting them. Even the main goal of Ski, trying to find a way for the colonist of Eden to provide enough food for Earth, gets lost as new ideas and new themes flood the narrative.

They are everywhere. The biggest one being this:
Ski figures out that the reason Eden isn't producing enough food is because the robots aren't dexterous enough to pick fruit efficiently.  In order to solve this, he (along with the Earth ruling council) decide to design the worlds most advanced AI in a humanoid body. This advanced superhuman doesn't exactly look forward to a life picking fruit so he designs simple robots to do it instead.
(raises hand)... so... if simple machines could have done the job... ... ...why did literally 50% of the book exist?
That's the biggest. But not the only one.

Something else that stood out like a Penthouse tucked into the front of a church pew was the strange male sexual fantasy shoe-horned into the narrative. Eden for some reason has tons of women and almost no men. So Ski, of course, gets to enjoy endless sexual encounters with all the pretty girls. Although he does fall helplessly in love with one, whenever the story goes back to Eden, there are random sex scenes that aren't so much explicit as awkward.
It's like watching a movie where the main characters just start boinking each other for no reason other than a producer somewhere wanted it there because 'sex sells.'

The most frustrating thing was the complete lack of character development. I feel like that alone, if done well, could fix or smooth over every other flaw in this book. But, sadly, the motivations of every character, especially Ski, changes on a whim.
The most glaring example comes early in the book where Ski falls in love with a woman, decides that he never wants to leave Eden and tries to figure out a way to stay. Next chapter, he leaves. ... Because that's what needed to happen.
I could think of a hundred reasons why Ski would eventually come to that decision but that isn't there. He goes because that's what the story demands right now.

7. Who Is Driving This Thing?:

For me, this is a good example of the pitfalls of having the narrative drive the story. The characters move like robots, plot holes open because the events of the past get in the way of what needs to happen now, and ideas are brought up and left behind as the story chugs along. The result is a book that feels like its constantly veering wildly out of control towards and ending that makes absolutely zero sense.

I think a lot of my frustration with this came from the fact that I really liked a lot of elements in the book and I wanted to like the story. But the execution wasn't there. Maybe its because I like character-driven fiction but the flaws are, I believe, too big for most people to ignore.
Maybe you could. Your milage may vary.
It wasn't for me.
Labels: Book Review Three Star What Jeremy is Reading