8 Things About Up Jumps The Devil

Meet John Scratch. A.K.A. The Devil and his newest pet project, America. Throughout the young nation's history, he has been there. Tending and shaping it to be a thing so grand that it rivals Heaven itself.  And when he meets three luckless musicians at the crossroads, his project can finally be complete.

But there is still a lot he doesn't understand about humanity. And as his ambitions spiral farther and farther out of control through the drug and sex fueled 60's, 70's and 80's he begins to wonder if he, the worlds first love story, can ever find happiness. 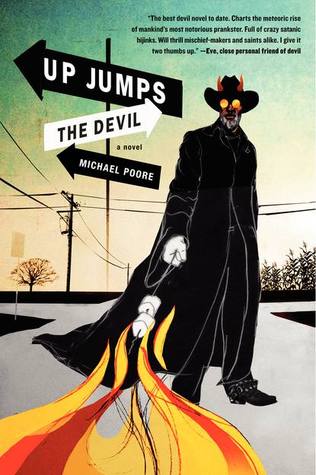 1. "Not So Much A Fallen Angel As Sauntered Vaguely Downward"

This is one of those books where The Devil is not really evil. He's just immensely pragmatic, which can come across as evil sometimes but is not the same. And, in this case, he's a bit of a romantic. And more than a little bit of a hedonist. Which just serves to make him highly relatable. In this case, the over-arching goal of the Fallen Angel is not so much to corrupt the souls of humankind (because it actually seems to work the other way round) but to build civilization on Earth to the point that it rivals heaven. ... So his angel girlfriend will like it enough to stay.

One of the more amusing features of the book is that it bounces back and forth through American history to follow John Scratch appearing to famous people during great events to... adjust the course of history. The United States is The Devil's latest great attempt to build a civilization to rival Heaven.

4. So Heaven Must Be Pretty Great Huh?

It's... endless ankle-deep water underneath a starry sky.

Yeah. There are a couple features of the book that you just gotta overlook. That is one of them. The other is that its hard to tell exactly what Scratch is going for when he is influencing the course of American History and how that is going to create a world that his angel lover is going to be able to live in. The whole issue is that being in the physical world is painful and unpleasant. So... not sure how a country of strip malls and pop music will fix that.

6. The True Tale of America:

Most of the book follows a group of musicians who make a Deal With The Devil in the 60's and follows them through their path to the turn of the century. And maybe its all the weed, or the coke or the existence of the 80's, but whatever path the Devil had set got lost.

And maybe that's what I really dug about this. The tale of the three musicians never really goes anywhere. At least, it doesn't go where the Devil intended and he has a crystal ball that can see the future. The guy that the Devil helped get fabulously wealthy goes down a weird religious rabbit hole. The guy who was supposed to change the world drops out of the world. And the woman that was supposed to be a famous musician... well you just have to read it.

In short, there's a very real tale about where our nation is headed if one has the will to see it.

Overall, just a fun book to read. The writing is clever, the story is compelling, there's no way of really knowing what's just around the corner. And despite a rather meandering story line that sometimes loses its way, the characters are dynamic enough and the writing is fun enough to be one of those 'oh, it's 3am already? Okay one more chapter' books.