8 Things About the Queensmen

In the kingdom of Mackabine a cruel, greedy coalition has usurped the rightful ruler of the kingdom. In the small country of Geid, Lord Fenwith rules the land and sucks his subjects dry with excessive taxes.

But where there is oppression, there is hope. The Queensmen, a band of rebels loyal to the rightful regime have organized in every city in Mackabine with Jed leading Geid's division.

As those forces rise, Senna appears at Fenwith's court to become his housekeeper and informant. But the Queensmen agent quickly finds more than she bargained for as she and the Queensmen lead a new revolution in Makabine. 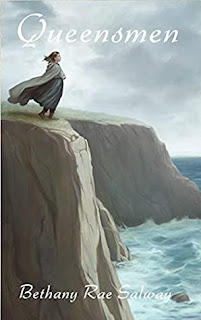 The book reads more like a historical fiction than fantasy which I rather liked. And the author skillfully crafts a complex feudal world that is largely accurate to the time period. And, in the process, there wasn't just a 'good vs evil' dynamic but a real-world struggle. Aint no magic, no dragons, just politics when it works and swords when that fails.

The story largely revolves around Senna, a young woman who, if she had been born to the right family would easily be a powerful ruler. As it is, she appears early and quickly has the castle under her control.  The story pretty much revolves around her trying to put the pieces together and keep the whole rebellion from falling into chaotic infighting. In a sense she runs the charge to reinstate the proper ruler. And she is only a little bit distracted by the handsome men she is aiding.

There is a romantic story line with her with the 'woman who loves two men' trope that bugged me at times but other readers might appreciate. And, even for me, it didn't get to the point where it took away from the rest of the story enough so that I couldn't enjoy it.

Every revolution needs one of these guys. Well, every revolution has one of these guys whether the Cause wants one or not. Headstrong, charismatic and with a brain that is often working just behind the rest of his body. He's got kind of a Robin Hood-eque feel to him. So much so that in the movie in my mind he was played by Howard Hill. It seemed appropriate.

Spoiler alert... well kinda. It does happen in the first 30% of the book but still. It's a rather nice twist that takes what one thinks the story is going to be and throws it up in the air for a while.

So bugger off now if you don't wanna know.

Cole is a Queensmen that happened to be an albino during a time when there was an opening for a Baronship that was expected to be filled with a high-born albino gentleman. So he slides in and starts steering his little fiefdom to aid the rebels... while making sure that the rebels don't know.

Which, ya know, makes it kind of fun.

These and other dynamic characters really worked to pull me into the story. Most of it led by Senna who, despite having the aforementioned romance, never really loses her edge and keeps the story engaging.  On the other side of the fight, however, is not as well defined. Yeah you got a group of men who are sitting where the rightful queen should be (that's right, girl power!) but that's about it. I never really developed a good sense of what ideologically was different between the two factions other than a nationalistic ideal of  who was the rightful ruler.

The other downside is that it becomes clear pretty early that nothing bad is going to happen to your beloved characters. This is one of those books where, just when you think all is lost and everyone is dead, something swoops in at the last minute and everything is fine... ITS FINE EVERYONE!

Which, you know, there are those that get really annoyed by authors who kill and maim characters with little to no regard for the precious feels of their readers.

Me, I like reading a book knowing that people can die of shit goes south. Gives the story a little more urgency.

But, these issues aside, I did enjoy this book. The author crafts a beautiful, intricate world populated by engaging characters who are well defined, interesting and who’s motivations and goals are often at odds with each other. The narrative, although somewhat predictable as other reviews have pointed out, is not strickly linier either. The story does, at times, take a hard turn or a sudden drop and, though the stakes are a little light, it still makes for a fun read.

Overall pretty good. Especially given that it straddles a lot of genres that really aren't my brand of whiskey. Fans of fantasy or historical romance will probably find a lot more to love in these pages and I would highly recommend it for that audience.  Especially since, I feel that a lot of the parts of the book I didn't like are tropes of those genres that are actually attractive to their audience.