Hello everyone. This will be my last post before 2020 comes to a close. It's been a strange year to say the least. Good in some ways: I'm now a father as of September which is still wild to think about. Bad for other ways... you all know.

Thank you all for stopping by once in a while to read about my gripes about books, writing and the world in general. Happy and prosperous new year to you all and I'll see you in 2021. And now here's Althea with my top 5 books of 2020.

Take it away, Althea.

Once again, thank you, Jeremy. Well, I should think it's been quite a journey so far. I hope you enjoyed these reviews and they've perhaps inspired you on some level. Well no point dragging this out. Jeremy's top 5 books this year....

#5: Fight Club
Well last time I finished on a review about a book that told a tale of the best and worst of people. This book is about mostly the worst.

We are still learning what exactly caused the Global Civilization to collapse and one of the exciting things about our missions is that we find new clues on every planet. I know this book is fiction but I think it tells a lot about the condition of the people —emotionally, physically, spiritually and economically— in the early 21st century.

It follows the story of a disillusioned young man who gets sucked into a world of violence and insanity by a strange cult leader. I imagine the warlords who emerged after the Global Revolutions being similar to this... Tyler Durden. Fearless and charismatic but completely amoral and a little bonkers. The result is… well a war against Civilization.

It was gripping on one hand but chilling at the same time. While I didn’t hate it, I don’t relish taking the journey again any time soon.

Jeremy and Erika Wine About Fight Club, because I would take that journey again and again.

#4 Gnomon
Another completely mental book. I am beginning to think Jeremy's reading habits are designed to annoy me specifically.

At the same time I loved this book. It might be the deepest mystery I’ve ever read. Not simply a detective novel. Anyone can deduce that the bloody butler did it.  But in this story the clues come across time and space. They are told through the tale of a Roman Alchemist searching Hades for her dead son, a Ethiopian painter and revolutionary and a Greek banker who’s life more or less begins and ends in his pants.

But vivid imagery follows each. The bankers brush with the shark becomes a clue to the gnomon itself. An object that sticks out among others like a shark fin. The painter reveals a world of chaos and oppression that the dystopian society of the future seeks to prevent.

And at the heart of the mystery is Diana Hunter, a woman who conceals her secret inside these stories. I won’t spoil the ending, not sure if I could if I tried. But, if you like mysteries there are several here.

#3: Up Jumps the Devil
A bit of old Christian Mythology here.

The book then follows the journey of these people as they get what they asked for in often quite unexpected ways. But isn’t that just the way of things? Be careful what you wish for and all that? Although the Devil seems just as surprised by the results as anyone. It's unclear that he does much other than he has a knack for placing the correct people in the correct place and time. But that’s the luck of the Devil, I suppose.

It was a fun, funny look into the old empire of the United States. There is quite a lot written about that place and time. It all feels plastic and fake. And here the Devil seems to have made it that way on purpose. Though looking back on the ruins of that empire, I can’t help but feel a little melancholy. There’s such a feeling of hope and exuberance that just gets swept away in drugs, sex and mindless entertainment. In that way, I guess you could say this book is a parable the American Empire itself.

You’re telling me. Jeremy’s Review of Up Jumps The Devil.

The book seems to make constant references to animated cartoon shows that they showed in America at some point it time. The main character (and by extension the author) seems vaguely obsessed with them.

The story was fun enough. A young homeless man discovers his father living in a rest home. And also that he can change into a werewolf. It all has to do with a group of villains who fight a group of heroes and all of them could change into dogs at some point. And that's just a pair of the madcap heroes and their older fathers stuck in a rest home for evil geniuses.

It’s like when you walk into a room and catch a conversation in the middle. I could follow bits and pieces but there’s a whole world that I’m missing out on thought. Very cute book though if over the top.

#1 The Kitten Who Rocked Holland 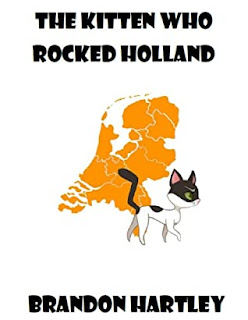 I was rather surprised to find this on top of the pile. And here I was thinking Jeremy didn’t like cute cozy things.

This is a story about music. Specifically the music of the late 20th century. And its about an old city in Ancient Europe. And it’s about a kitten who just wants to listen to and eventually play his little kitty heart out.

It’s a coming of age story really that I feel transcends time, culture and… well species in a way. At the core there is this conflict between what the world expects of you and what you want to do for yourself. And many are satisfied to take the path laid out for them. But most do it only reluctantly and maybe a few of us find a way to break free.

I guess I see a little of a young me in the sassy little kitty protagonist. A brilliant finish to the list. Worth seeking out.

What can I say. A cute kitten story found me at the right time during this awful year. Jeremy’s Review of the Kitten Who Rocked Holland.

Well, I suppose that's it then. Thank you for reading this. Hope you do give a few of these books a chance. And thank you for supporting Jeremy and his Ruins of Empire project. A new adventure is in the works as we speak. I can already hear them breaking down the doors... so to speak.

Farewell, be kind to each other.