This is how the story begins... 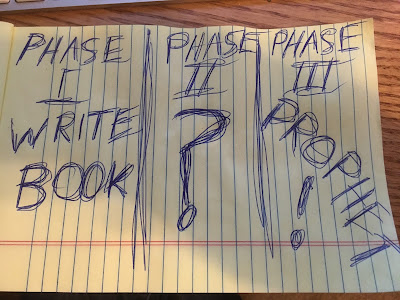 On June 10th 2017 at about 11:30am I leaned back in my chair and looked at the completed draft of Saturnius Mons.  It is the first book of my Ruins of Empire series and currently 263 pages.  It's done.  I wrote a book.

I had decided that working for other people sucked.  It was and remains necessary so that I might continue to buy booze and sleep in a house, but it sucks.  It's like taking a shit.  It's messy, slightly painful and takes too much time out of my day.  Most every job I've ever had, however, lacks the feeling of accomplishment.

So the jobs became the things I had to do in order to fund this.

And like I said, that was six years ago.

And now my first book is completed....

More accurately, it as finished as I can get it by myself.  I'm talking to editors in anticipation of hiring one and my the first printed copy of my book is somewhere on a fishing boat off the coast of Alaska with a man working on the cover.

And research.  So... much... research.   All trying to figure out how to turn some crap that I made up in my own mind into money.

"The journey of a thousand miles begins with a single step"

Stepping into self publishing is like one of those cartoons where the character is lost in the woods and comes upon a rediculous sign with twenty arrows pointing in all directions.  There is so much information out there and its hard to sort the useful advice from the survivorship bias, the incomprehensible and the douche bags who are more excited about being successful than they are about they thing they are supposedly successful at.

Partially for my own edification, I decided to document the process here.  Think of it like open notes.  Or breadcrumbs thrown behind me so I can find my way out when I reach a dead end.

And who knows?  Maybe they will serve as a guide for another writer someday.  Or a warning.

This is a document about how the Ruins of Empire series turned some nameless, pantsless fuck in Nampa, Idaho into one of the best selling authors in history.

This is a record of some poor sods first attempt to put something together himself only to have it disappear into the fog of obsurity.

Maybe somewhere in between, but most likely more toward the latter.

This is where the story begins and, like any other good story I have written, I have no idea where it ends.