Subplots On The Cutting Room Floor.


So here's the file information from the first version of the first chapter of Saturnius Mons: 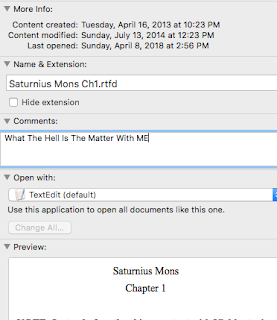 April 16th 2013.  Almost exactly five years ago.  Sometimes it boggles the mind to think that I've been working on this project this long.

One of the reasons it has taken half a decade to get to this point is that Saturnius Mons required a major rewrite.  In fact, I would say 80 to 90 percent of the content in the final version has been completely rewritten since version number 1.

One of the reasons for the major rewrite had to do with the same problem I had writing the first book that I mentioned in the first author's commentary track.  Namely that I had a hundred ideas and THEY ALL HAD TO GO INTO ONE GLORIOUS BOOK!!

Except that with all those ideas, the plot exhibited roughly the same behavior as a dog with a hotdog tied to the end of his tail, a lot of spinning in circles but no real progress.

And when it came time to figure out why this story still wasn't working as well as I would have liked, one subplot, in particular stood out.

Slight spoiler alert at this point.  If you haven't listened to chapter 5 yet the following contains some details that you might prefer to not know until you've finished the chapter. Or maybe you do.  I'm not gonna tell you how to live.  YOU DO YOU, BOO!

From Saturnius Mons Chapter 8 Vers 1:
“...It’s absolutely amazing what we are finding.  We have yet to find a plant on this moon that doesn’t have some edible portion to it.” said Dr. Idida as Viekko sat down.

“How do you know that?  Did you bring an intern to sample all the food first?” said Viekko.

“Well obviously we were curious as to what kind of plants would have been used in terraforming, especially the kind of agricultural crops that could be imported or developed, so we brought chemical analyzers with us.  But what really tipped me off was the mammoths.”

Idida nodded, “They were grazing in that valley for the better part of an hour.  Then, out of nowhere, one of the big bulls up and left and the rest of the herd followed him out.  Within a matter of minutes the whole valley was empty..  At first we thought we had done something to spook them, but fifteen minutes later a new herd settled in it’s place.”

“Where did they all go?” asked Althea.

“Not really sure.  We weren’t prepared to follow them and I really can’t stress how fast they moved.  Our best guess is that some person brought the first herd in while the second was sent out to pasture.  Still, the chances of that being a trained behavior are slim.  The best trained animals would still need some form of direct human interaction to make sure they did as they were trained.  We think the herding behavior is genetic.  Not only genetic, but genetically engineered.”

Viekko brought a forkful of food up.  It looked like a small carrot, except it was smooth, dark red and it tasted like... well, he couldn’t describe it, but high-end restaurant owners would be the driving force for space exploration if this secret ever got out.

“How did that lead you to the food?” said Althea.

“Well, have any of you heard of Dr. Kostya?”

Althea glanced at Ariane.  She kept her head down as if she were ignoring the entire conversation.  Althea started to say something.

“Yeah.  I’ve heard of him.” said Ariane without looking up.

“Well, are you familiar with his papers regarding the ideals of terraforming?”

“Exactly.  An entire ecosystem built around human habitation.  Every plant, animal, insect, bacteria and fungus all existing to aid the survival of mankind.”

“I’m familiar with the concept.  Studies from his era show that it was too complex a problem to be put into practice.  You’d need some common source of nutrients to make sure the entire ecosystem could be monitored and controlled.”

What you are reading is the starting point of one of the major subplots in the first version.  In fact it was so major that it was beginning to compete for attention with the actual plot of the book.

At the time, I thought it would be interesting for the characters to discover how Titan was terraformed and how the society evolved to its current state.  But, when it came time to start cutting all the parts of the book that weren't working, I realized that it really didn't matter how Titan got the way it was, but rather what was going to happen to the people right now.

Around the time I decided to cut that subplot, me and my wife -who had just read the first version- were talking about the book.  I strangely remember that night because it was the first time I had ever talked to another human about the people and events that had hitherto existed only in my head.  To hear someone else mention Viekko Spade in conversation as if he were a real person who was doing real things that I didn't just make up in my own mind.  It was kind of mind blowing at the time.

It still is, come to think of it.

Anyway, I told her that I was going to cut this subplot out.   There was one problem, though.  The mammoths.  It turned out she liked them.  I don't remember why other then they stood out as something interesting in the book.

So kept them while everything else went into the bin.  And I'm rather glad I did.  I think they give just enough of a clue as to the history of Titan without falling down that rabbit hole.

And plus, you know... Kari likes them.