10 Thoughts About Josh Anvil and the Cyprus Door

10 Thoughts About Josh Anvil and the Cypress Door 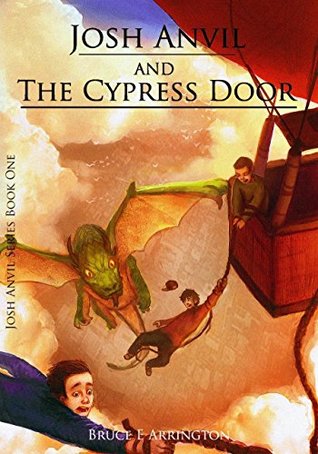 Josh Anvil is your typical American teenager until something happens. He ventures into the Lousiana swamps in his canoe trying to figure out how to tell his family that he's leaving school but, after he is found unconscious, he suddenly realizes that he has the power to alter the nature of reality just by making up the story. But even though he can conjure dragons, a floating island paradise and a housekeeping staff for his parents, he must contend with all the trials and tribulations that come with being teenager including sports, being popular and trying to get the cute girl to go to homecoming.

1. Gettin Into A Saturday Morning Frame Of Mind:

It's weird how my brain works sometimes. As I first started crawling through the pages of this book, I have to admit, I was mostly annoyed. Nothing made sense. You've got a teenager who is essentially omnipotent. His parents are mostly fine with that. There are dragons flying over Louisiana and the people are only vaguely weirded out. Half the town is burning to the ground, but nobody is all that concerned.

But there was also something charmingly playful in this book, and, as I let myself get sucked in, I felt like I was reading a Saturday Morning cartoon or one of those goofy teen dramas they used to (and probably still do) play on Nickelodeon. I'm talking about the Secret World of Alex Mac or Space Cases or other shows that only people who grew up in the '80s and '90s even vaguely remember anymore. Shows that only really work if every adult in the Known Universe has had their brain removed.

In a weird way, I enjoyed it after I put myself in that headspace.

I got the sense that the author didn't want to write a story that has to be taken totally seriously. It was like the entire thing was designed from the get-go to be a whimsical tale about a kid creating dragons and floating island, and whatever else he could dream up.  And to do that, well... you have to suspend a lot of disbelief. You're just going to have to accept that dragons can appear and the people will more or less take it in stride.  You're going to have to accept that the FBI and the military are essentially huge Three Stooges sketches with helicopters. You'll just have to make peace with the idea that since the kid is essentially omnipotent, any conflict is more or less for the look of the thing.

Don't think about it too much, just enjoy it.

Yeah, dragons just appear! And everyone's fine with that. Again, I know why it has to go like that.  A fun, whimsical tale is a hard thing to tell when an entire population is thrown into panicked anarchy. But still...

4. Also, can we talk about his parents for a second?

When Josh Anvil and his mother have a heart to heart about his powers, she reacts by saying this:


She leaned toward him. “Josh, we know you. You are a dependable, loving, and caring person. We can trust you to make right decisions.

I'll take things no parent has ever said to their teenage son for $100, Alex. I don't know about anyone else, but, when I was a teenager, my parents barely trusted me to not light my hair on fire at any given time. And they were right to do that. I was dumb as shit.  So are most teenagers. The fact that he can create anything he wants by sheer will alone should have his parents running for the state lines.

But again, hard to be playful and whimsical when the parents are fleeing from their son who has the powers of a god.


5. And can we talk about the FBI and Military?

Early in the book, Josh and his dragon are picked up and chased by military helicopters. He conjures up smaller flying dragons to take them down.

Later he is (very belatedly) picked up by the FBI who let him go when his dragon attacks the building.

Both agencies pretty much take both of these incidents in stride. The military is totally okay with two of their black hawks being taken down by hostile dragons. Prisoners escape from FBI custody all the time with or without the aid of mythical reptiles.

But again. A playful, whimsical story rarely includes a teenage boy locked away for his own protection and the protection of the entire world and subjected non-stop to medical experimentation.

At the beginning of the book, Josh finds himself at the butt of abuse and bullying from the other kids in high school.  But when he gets SUPER POWERS.... nothing really changes.  The kids are still total jerks. Which is obviously... 100% accurate. No complaints there really. Teenagers are the worst humans, and to have that illustrated was one of the things I found most charming about this book.

7. Hey wasn't there someone lighting fires all over town?

Okay, one legitimate fault in the story was that, while Josh is summoning dragons, floating islands and an entire household staff for his family and dealing with high school, there is apparently someone running all over town BURNING EVERYTHING TO THE GROUND!

And yet, it's a part of the story that's always weirdly in the background.  It's brought up quite a lot, every once in a while Josh pauses his whimsical adventures and notices the burned-out buildings, sees a news report or comments about the amount of smoke in the air. But it's very much a story arch that's left until the very, very end.

Maybe it's me, but I would have found the story of Josh trying to track down and stop who or whatever was doing this a lot more than chapters detailing entire days spent at high school.

Of course, for me, just about anything is better than a day at high school.  It was the worst. Just sayin.

8. In the End, Tell The Story You Want To Tell:

At this point it probably feels like I'm shitting all over this book, but, looking back, I find all these things rather charming. Art isn't supposed to be reality. Becuase reality doesn't allow for a teenager to summon dragons, spiders and slightly offensive Irish horse breeders out of nothing.  Reality sucks like that.

But what if one could, and the rest of the world kinda went along with it to see where it goes?  That's the point of Josh Anvil, I think.  Or, at least, that's what I took away.

So Josh Anvil and the Cyprus Door is only the first in a series of books that detail the adventures of the young god/human.  Is it something I'm going to continue?  Possibly. Not immediately. But I could see myself making another visit to this strange reality. We'll see.

Should we talk about the moral implication of creating consciousness beings from nothing in order to be your servants....nope?  Fair enough. Enjoy!
Labels: Book Review What Jeremy is Reading