6 Thoughts About Trust A Few

Avilon Revid is being released.

After five years in the 'specials' a military platoon made up of expendible criminals, he is one of the few who have survived long enough to return to society. But, in order to learn how to exist in a world beyond the strict military disapline and set rules, he must seek out an old friend of his. He finds himself tossed on the streets of the 'City where the crime lords are invovled in a brutal campaign of murder and betrayal and the only way to survive is to... well... that's where the title comes in, isn't it. 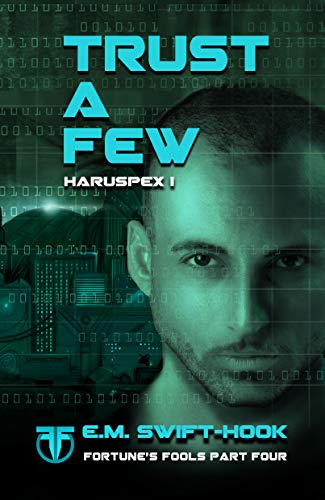 Ladies and Gentelmen, Meet Your Players:

The only way to really talk about this book is to look at the characters inside. If forced to summerize this book in the simplest way possible I would have to say, 'a group of criminals get shoved into a starship and flung to a crime-ridden hellscape to deal with their issues'.  Which, of course, begs the question, who are the criminals in question.

We Believe in Nothing, Lebowski!:

Okay, the central theme of the book doesn't really cross over into true nihilism, I just really, really wanted to quote the Big Lebowski.  The ideas surrounding good and evil swirl around Avilon Revid who is a convicted criminal and was sentenced to serve as a solider for five years in a regiment that, to put it mildly, was considered expendable. The problem is, Avilon has no memory of what he did to land himself in that situation and while he appears to accept that he was an evil person who did terrible things, the reader is left with this feeling of uncertainty. And, in fact, if there is an innocent in this story, Avilon is probably the best candidate. His record is far from clean, but nobody's is in this world of crime, betrayal, and murder but there is an ambiguity to his crime that begs several questions about the nature of evil and justice.


Kafka Would Be Proud:

Another interesting aspect surrounds Charity, a freighter pilot from the rich and protected world of Central who is suddenly and without warning pulled from her life for violating a relatively minor part of her immigration agreement and thrown out into a world she has never known and is not prepared for. The obvious parallel to a prominent issue in our modern world aside —althought that is interesting too— it is, in a sense, her desire for freedom and individuality that gets her tossed in with this group of miscreants but, in the end, drives her ability to survive. I feel like life would be easier for her if she could just Conform GodDamnIT! but she won't.

You gotta have a mysterious figure. You just gotta. I think it's in the Contract.  That roll is filled by Durban Chola. Where does he come from? Nobody is really sure. What does he want? Seems to change by the hour. The only constant about this guy is his urge to bring justice to a place that hasn't seen a lot of it. Which is good, right? Wel... that depends on your view of 'the ends justify the means'.

Oh, And Then There Is The Asshole:

Jaz is almost the embodiment of the world the characters find themselves in. He is violent, opportunistic, selfish and good at what he does.  Which is mostly involves beating the crap out of people. AND YET... the author manages to coax something relatable out of him.  For me, I got the sense that he wasn't that way because he wanted to be that way. He became that way because that's how society engineered him. The carrots and sticks alighed so that only the most brutal, selfish bastard gets to live. You run that algorithm and SURPRISE! the brutal and selfish rise to the top. But glimpses into his past as well as his interactions with the others suggest something deeper.  When he is, you know, not punching the aformentioned crap out of someone.

And therein lies the most interesting thing about this book. It's not so much the events which the book moves through at a pace that was, admittedly, a little hard for me to stay engaged with. Maybe it's my ADD mind or the fact that I've gravitated toward books that move at the pace of a rocket donkey so long that I've forgotten how to enjoy a slower novel with a richer, more powerful build-up.

SEE! That's how my brain works now.  I actually stopped writing mid-sentence so I could look up a picture of a rocket donkey!  THE POINT IS... for me this was a book that took some effort to read.  But I'm glad I did. I seemed to pick this up right in the middle of the series, although I didn't feel too lost falling right in the middle. Well definately book some time to crawl through this entire series someday.