Britea was just your average farm girl living the simple life pouring through books and bickering with her sister. But during a particularly nasty squabble, she finds that she has the budding abilities of a wielder. Specifically, a water wielder as she discovers by pelting her annoying sister with water she magically lifted from a kettle warming on the stove.

And when they do in this world, the perspective wielder must attend a special school in a far away land.  Within a matter of hours, Britea and her father talk their way aboard a ship and sail off for Raven’s Fall.  But, in this world, the seas are the realm of the Dyhaeri, a race of humans that live in an underwater city and harbor a deep mistrust of humans that live on land.  Not long after they sail off, a young Dyhaeri man named Khal boards the ship with orders to begin Britea’s instruction.  And after that… well if you are a fan of Young Adult Fantasy Romance, you can probably guess where it goes from there. 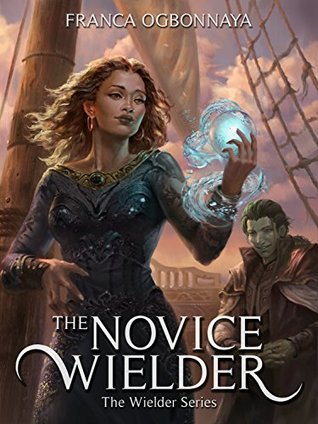 This book struck me as pretty formulaic. I feel like there is defiantly an audience for this kind of book, that audience knows what they like, and they have a checklist to make sure everything they want is there.

Teenage girl who is remarkably unremarkable gets superpowers? Check.

Handsome Guy turns out to be a vampire? Well… it’s only the first book in the series.


One thing that did bug me was that, as I read, I could almost feel the story bending to hit all the required plot points.  One, in particular, struck me pretty hard.  So at the beginning of the book, Khal is ordered by the king of his city to find and train Britea.  Flash forward toward the end of the book and the Dark Powers That Be are circling around Britea and Khal rushes out to help her, the same king and high priest seem to have forgotten all about that order and shocked -SHOCKED- that he would help one of those… surface people.

3. Atlantis or the Little Mermaid?

One thing I struggled with was what exactly the Dyhaeri were. For the first half of the book, I was pretty much picturing humanoid sea creatures.  Something like Kevin Costner in Waterworld; mostly human but with adaptations that allowed them to live underwater.  As the book went on, it seemed that they were fully human, but with some magical and/or technological progressions managed to build a functioning society underwater.  Now that the book is done I’m still not exactly sure what those people were.

4. Is There A Villian In The House?

So dark forces are circling. A dark queen (who we really never see) has sent Captain Wolfen to patrol the seas hunting down every wielder he finds.  Why does the queen order this? Nobody is really sure. What are they trying to accomplish? Wolfen, like a good soldier, never questions it. In fact, Wolfen’s entire presence in this book is way in the background until the big climax.

Because you need a big fight at the climax. Girl must use her powers and newly acquired self-confidence to beat the bad guys. It’s just what happens.

Also, the bad guys use ships powered with oil.  Because bad people have no regard for the environment. That’s also a thing.

5. When The Intangibles Come Together…

So, at this point, it might sound like I absolutely hated this book. It had its flaws, for sure, but I strangely enjoyed it, and I don’t know why. Something about the characters, the language, maybe even a bit of the swashbuckling adventure aspect, I can’t put my finger on it which… you know, is which is what intangible means.

...But maybe not enough to continue with the series.  Part of this is because I am picky, and a series is a big commitment. But, this type of book clearly has an audience.  And that audience is not likely to get hung up on the details that I do and would absolutely devour a series like this.
Labels: Book Review What Jeremy is Reading