Strap in, friends. This one gets a little weird.

Hiro Protagonist (a character name so brilliant that every author should slap his/her head for not thinking of it before) is just an average guy delivering pizzas for the Mafia a.k.a Uncle Enzo's CosaNostra Pizza Inc. Except for he's actually this brilliant hacker that helped create the Metaverse, a virtual reality world where millions live, play and work. Oh, and he's the best swordfighter in the world.  And his best friend is this new pop music sensation.  But ALL THAT ASIDE, yeah he's just a normal guy.

But when a new drug/virus, Snow Crash, is released on an unsuspecting Metaverse it's up to Hiro along with his teenage, car 'pooning, Hell On Wheels, skateboard messenger partner, Y.T. to discover its secret and prevent spreading across the Metaverse and unleashing the Infocalypse. 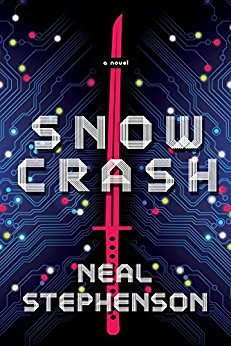 Where this book really shines is not really the story or the characters (although I did love Y.T. with all the hearts), but it's the world. Imagine our modern world, but where all the insanity that you see around you has been bumped up to the Nth Degree. The United States has been bought, sold, and divided among a few mega-corporations. The middle class has racially divided themselves in individual 'Burbclaves.' The most brilliant minds in the country are forced into menial labor to survive. Religious dogma has driven people to live in almost junkie-like squalor. Individuals are running around strapped with nuclear weapons. And, in the middle of it all, there is an unprotected digital realm that can bring the whole damn world crashing down if someone got the itch to do so.

The world of Snow Crash is a stupidly weird place, but it's weird in a chilling way because it's only a slight exaggeration of our modern world. This concept becomes clear from a passage from page #2:

"This is America. People do whatever the fuck they feel like doing, you got a problem with that? Because they have a right to. And because they have guns and no one can fucking stop them. As a result, this country has one of the worst economies in the world. When it gets down to it—talking trade balances here—once our edge in natural resources has been made irrelevant by giant Hong Kong ships and dirigibles that can ship North Dakota all the way to New Zealand for a nickel—once the Invisible Hand has taken all those hitorical inequities and smeared them out into a broad global layer of what a Pakistani brickmaker would consider to be prosperity—y'know what? There's only four things we do better than anyone else.

2. Wait, Dirigibles?
Yep, I just saw that as I was typing that quote up. It never really comes up at any other time in the book.  Just a weird quirk of this world that is never explained.

3. Jim Crow In A Burbclave
One of the most interesting concepts from SnowCrash was the Burbclave. These are the identical planned communities/ sovereign nations spread out across this land where the middle class has racially and culturally segregated themselves from the rest of the country so they can live safe and sheltered away from the anyone who looks or thinks differently from them. And despite sounding like something that would have happened if the South had won the Civil War, I'm not entirely sure that we, as a society, wouldn't do this now if given half a chance. Remove the inherant inequality that came with segrigation and make the entire idea truely 'seperate but equal' I could see huge portions of the country packing their shit and moving to a place where they knew everyone shared the same culture, values, religion and, yes, skin color. And that, in and of itself, is a little frightening.


4. I Left The Story Here Somewhere...
The world-building is amazing. But the story that takes place inside... probably my least favorite part of the book. It's weird to say that my least favorite part of the story is THE STORY, but there you are. That's not to say it's bad. It's just like... taking a drive through the most beautiful scenery in the world only to arrive in Muncie, Indiana.
And it might be me. I found myself having to stop and go back several pages more than a few times to figure out what the figgity fuck was actually going on. It weaves into the Metaverse and darts into Babylonian mythology before charging headlong into a high-traffic area where crazed gun-toting racists, trillionaire capitalists, drug-addled religious fiends and the occasional killer dog-cyborg hybrid charge at each other screaming into battle.

5. The Ultimate Protagonist— Hiro:
I was conflicted about the main character. I mean everything in this book is Over The Top.  Guys running around with rail guns, a villain who's goal is to nuke the United States and carries around said nuke in a motorcycle sidecar, a guy who's wheelchair is basically a armored assault vehicle... my point is that every character is written with the wry eye to subtly as a pyromaniac with a flame thrower. So why wouldn't the main character be basically the Ultimate Hacker/ Warrior? And I guess it was unsettling because of Chapter 1.  This book really drew me in at first for the outlandish almost breathless1st person speaking in 3rd person narrative:


I immediately fell in love with this charming dweeb for whom pizza delivery was a matter of life and death. I looked forward to his rather pedestrian life being narrated as if it were some kind of action/ spy thriller with Deliverator standing between the world and Certain Doom. Not to mention late pizza.

Except... that's pretty much it for Deliverator and his pizza delivering.  The rest of the book follows Hiro Protagonist, and it turns out that he actually is a badass. And something about a badass who knows he's a badass and who narrates his own life like a badass... ironically, not badass at all.

6. Yours Truly For The Win:
I got to the point where I was looking forward to the chapters featuring Y.T. more than Hiro.  While he was busy arguing about Babylonian mythology with an elderly virtual librarian or and occasionally getting into real and virtual sword fights, the sassy, quick-witted Kourier was busy breaking out of jail, ingratiating herself with the mob, terrorizing drug colonies and generally sticking an M80 up the ass of society. Whether or not she was meant to be Robin to Hiro's Batman, she pretty quickly sped away with the Batmobile leaving Hiro in the dirt and flashing him The Bird.

7. I Lied. I Liked The Babylonian Stuff:
Okay for a history nerd like myself, I actually did like how to explain what Snow Crash was, one had to go back to the beginning of human civilization. The way Stephenson weaved our modern technology into the fiber of our very being was fascinating, and this mixture of Ancient civilization with near-future consequences was fun. Some of the chapters that went deep into Babylonian mythology started to drag a little, but they were interesting in their own right. And the pacing was done well enough that Y.T. was never more than a few pages away to 'poon us out of class and take us for a ride.

8. Meet Your Villian. I Dare You To Hate Him:
Speaking of over the top, let's talk about Raven. Raven appears on the scene like The Mountain from GoT but on a motorcycle. And has that same air of focused chaos. Like, you don't know what he's going to but it doesn't matter because ain't nobody going to try and stop him. But as his back story becomes clear and you actually get to know this three-hundred-plus pound of rage and muscle, you can't help but like him. Maybe even root for him a little. Sure, his goal is to nuke the United States but watch cable news for a twenty-four hour period, and you might start to agree with him on some level.

9. The Most Abrubt Fucking Ending EVVARR:
Not going to say much about it. This is not a place where spoilers happen.  But you know that chart they used to show you in class about story structure? It had Inciting Incident, Rising Action, Climax, and Falling action, remember that?  Yeah, this book said, Fuck You Falling Action, we're done!  End Story Now!

It works, but it did catch me off guard.

10: And the Verdict:
⭐⭐⭐⭐ and 1/2.  I liked it. A lot. Would recommend and would (and probably will) read again. The main character kept this from being the full five-spot for me. But, overall, a fun read full of chilling quotes about our modern world.
Labels: Book Review What Jeremy is Reading