What is it about the third chapter in every book I write that just nags on me? Maybe its a case of writerly self-loathing, but the middle part of my first act always seems muddy. There are things that I think are required to fill out the story, but I always get concerned that I get stuck in the details and am not moving the plot forward. I don't know. I report, you decide.

We continue to explore what makes Althea tick. For me, she's kind of reformed femme-fatal. A recovering addict in her own right that is starting to realize how her actions cause pain to others but still can't quite find the will to stop.  She's the alcoholic who is already late for his kid's birthday but decides he is going to pull into the bar anyway. He knows he's going to feel really bad about this in a couple of hours but it doesn't matter right here and now.

I'm also spending some time expanding the Ruins of Empire Universe in this chapter. I want to paint the picture of a rebuilt society that's similar to ours but different. One of the biggest challenges I have is trying to imagine how we, as a species, would restructure society if everything went tits-up. I almost wish I could do more world-building on Earth but that's not really where the story takes place. So maybe it's worth lingering here for a moment. 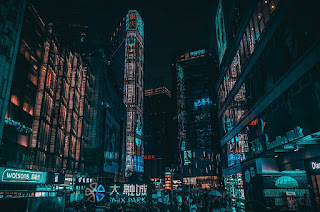 I've said it before and I'll say it again. Writing dialogue between Althea and Viekko is probably my favorite thing ever. Writing Viekko is fun anyway if only because he is a man who has exactly zero fucks to give. But writing he and Althea together just flows so well. When their personalities start bouncing off each other, I understand the idea of 'words writing themselves'. I can clear a couple thousand words without really thinking about it. I'm just transposing the argument into words. In one social media post, I wrote, "If Viekko and Althea were playing Fuck, Marry, Kill, they would choose each other for all three." That's the best way I can describe their dynamic.

And this scene is basically their relationship in microcosm. They so want to bang and they are so close to banging. Unfortunately, every time they are about to, their baggage comes knocking; in this case, literally. When I'm writing these two people together, I imagine two people who would be happily in love if they could just get over themselves and their own shit.

But they can't. And, thus, they find themselves as trapped as the rat in the sack.