In the safest society humans have ever built, the System watches everything. Every thought is recorded, every movement analyzed. Memories are recorded so that any crime can be instantly investigated.

But when Diana Hunter dies on the operating table during such a procedure, Inspector Mielikki Neith is assigned to discover what went wrong. As she pours through Diana's memories she finds a glitch. A hack. A malfunction in the System.

In order to protect herself, Diana Hunter has created a series of false memories. Each one is so dense and so detailed that they are indistinguishable from real life. But as the inspector starts to live out each story, a series of clues will lead her to the truth about the System and the 'free' society she strives to protect. 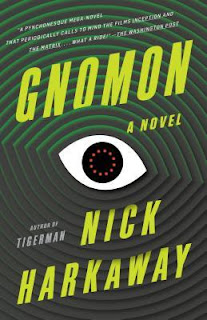 Gnomon is less a story and more of an experience. Like most detective novels, Harkaway invites the reader to try and figure out the mystery by peppering the narrative with clues as to the secret of the System and the weird, dystopia we find ourselves in.

Although this particular novel works something like this. Think about a cartoon detective. You probably imagine some dude with his deerstalker cap and a huge magnifying glass hunched over scanning a carpet for the tiniest clue. Now imagine the author standing a few feet back, clutching the end of the carpet with an evil gleam in his eye and mischief in his heart.  Yeah, faceplant into the carpet time.

That's you. You're the cartoon detective with an eyeful of magnifying glass splinters.

This is because part of the challenge is figuring out what is even real, and what is an intense fever dream conjured by, arguably, the most cussedly stubborn character in all of literature. In the book Hannibal, by Thomas Harris, the titular character is described as being drugged to confess a crime and he gives the officers a recipe instead.

Well drugged up, tied to a chair and with a team of doctors downloading her brain, Diana Hunter creates three entire stories to confound the doctors, Inspector Neith and, ultimately, us.

So eat it. Lector.

Although not literally; though I know that's how you will take it.

3. I Hope You Have A Dictionary Handy...

Also, a book on Greek and Roman mythology, a functional knowledge of modern Ethiopian history, perhaps a piece on classical alchemy... The point is that Harkaway demands a lot from his readers. He tends to use words so obscure that even the dictionary gazes at you blankly when you go to look them up. He assumes a level of knowledge that I think most readers just aren't going to bring to the table. Not that you have to study to read this book, but, if you're anything like me, you'll read something, get confused, look it up and spend the rest of the evening falling down a Wikipedia hole.

I guess what I am saying is this book is the equivalent of a poorly maintained street, except the potholes are Wikipedia holes. And they will swallow your fucking car. 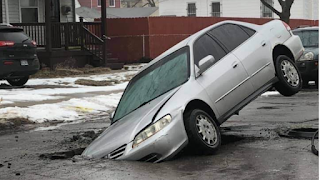 4. The Art of Creating Characters In Action:

For those with self-control and who don't happen to know the Greek mythology of the four rivers of Hades, (yes that is a thing that comes up) the good news is that the characters really carry this story.

Both the real characters and the imagined ones have this uncanny ability to suck one into their world. We've got the cussing, sassy Ancient Roman alchemist searching for her dead son, the Ethiopian-born painter trying to remake the world, having survived the fall of Haile Selassie. Hell, even the pompous, greedy banker, who's thoughts begin and end inside his pants, comes off strangely charming.


5. Then there is Diana Hunter.

This book is really about her, and we spend a good deal of the narrative learning about a woman that is so amazingly and stubbornly independent that she might have used her brain to kill herself out of sheer orneriness.


6. Except It's More Complicated Than That:

Really, that could be the title of this book.

The only character that really fell flat for me was Detective Neith, the cog in the System that dutifully fulfills her function until she decides not to anymore because that is what the plot requires. Also, she falls in love with a guy walking his dog. That must happen. Because plot.

Not that it's bad, but we spend so much time in literally everyone else's head that it feels Neith is just the vessel. She seems to have as much agency as a car; something to drive to the next stop on this wild tour.

And maybe be prepared to give this book a second read-through. This is just not a book one can pour through in a weekend before going onto the next one. It just isn't. Clear out a week of evenings. Maybe a couple of them. Brew some tea, pour the scotch, smoke a massive bowl... Whatever you need to do to get into the right mindset and take your time.

Despite the long passages of almost dream-like events where it's hard to pick apart what is actually happening, the confusing shifts in narrative and the sheer density of the book, I found myself totally sucked into the story. There are books that make morning and evening reading times feel more like a chore or an exercise in stoic discipline.  And then there are those books that make it seem like the highlight of the day.

This was the latter. It was a book that forced me up way past my bedtime trying to sort out, not only what comes next but what is happening right now.

Again, if you're looking for a nice, clean, structured story, keep moving. There's no happiness here. But if you're in the mood for something a little weird and cerebral, then yes. Do it. Twice.
Labels: Book Review Five Star