6 Things About The Witches Vacuum Cleaner

Very simply, this book is a glimpse into the early career of one of the finest wordsmiths ever to live. This collection of short stories are silly and fun. Magical but down to earth. 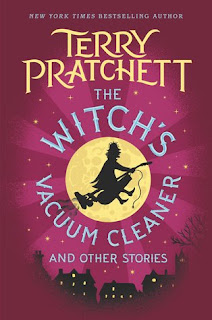 And that is a collection of short stories for children. They have a bit of Pratchettian flare to them, but otherwise, they are just cute little stories. They don't really go anywhere they are just random bits of imagination that sweep you away on a journey before dropping you back at the station.

2. Also, I Invented the Word 'Pratchettian'

And really the only word to describe this book. They are fun little stories but that's about it. The author dreams up a bizarre situation, it meanders through a narrative and then goes away. What it's missing are the clever little twists that would be a defining characteristic in his later works.

4. Nobody Starts Out Good At This:

And that brings me to the most valuable part of this book. It's a look into the early career of a writer who would go on to become one of the most popular authors in the world. As a writer still hacking his way through an early career, its heartening to know that even the greatest writers needed time to work on their craft.

Okay, there are probably a few people who burst onto the scene writing brilliant works the first time out but, seriously, fuck those people.

There are three stories that are basically Westerns set in Wales. And they are amazing. Desperados leaping from bikes onto trains, a frenzied coal rush, swindling sheep rustlers and more apologies than a Canadian regret convention.

It was a fun book. I found the stories to be a bit simplistic but they are mostly for kids so... you know... deal with that. The stories arent great but Pratchett admited a few times that he isn't terribly good at short stories. But they were fun.  That's good enough for me.
Labels: Book Review Four Star Terry Pratchett What Jeremy is Reading