How do you write a fight scene where instead of guns and bullets or punches and kicks they are using words and body language?

I don't know, but this chapter is me trying to write that.


I've often said that Isra's superpower is the ability to read people.  As she was described from Viekko's point of view in the first book, "Viekko wouldn’t go so far as to say she was psychic, but whatever innate skill or talent that psychics needed to convince people they were psychic, Isra had it. A lot of it."

I like that quality about her, especially in this group, but it's a hard thing to write about compellingly. Reading it aloud again I like how both Isra and the Rainha know that this is a farce. It's a dance of dominance with both sides simply playing a part that they think will get them what they want.  To be honest I wonder if that is what goes through the mind of most politicians as they glad-hand and bullshit their way through their careers.

Although the thing that strikes me as odd is that Isra goes immediately submissive when she discovers what the Rainha's true desire is. I know why I made that choice at the time but it feels odd now. I think I meant it as a strategic retreat and regroup but it reads like a full-on route.

But maybe that is the right response. If this conversation is a mini-battle than learning what Isabel's real goal is like realizing that the hill you've been defending is literally nothing but a patch of dirt. The real prize is somewhere else. 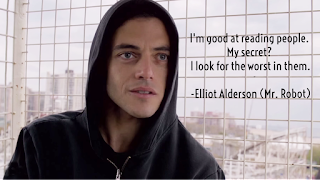