If you don't know what I am talking about you should definately listen to this chapter before reading.

And, actually, it was a decision that came very late in the process. My first two draft didn't have anything close to this dramatic which, as of now, makes this is the most dramatic shift that I've ever done late in the writing process.  This is only my second book, mind you, but I feel like it's a doozy.

One of the problems with Saturnius Mons from the very beginning was that it felt like a group of people just wandering the landscape with no real purpose. Just wondering.  In search of... nothing in particular. No real progress until around the end when they wander into the right place finally and do something.

I managed to mitigate some of this but, still, I feel that there was some 'residual wandering' if you will. If that is a thing. At least an unfocused feel that I never managed to wring out of the book.

So when it came time to write Templum, I was hyper-aware of that flaw and wanted to make sure that my characters had defined goals, a clear story arc, and were constantly (for good or ill) following those goals. There was a problem though and I call her Isra.

In the earliest outlines, I had Isra turning against the group at this point. Like Viekko and Cronus, I wanted her to be so entranced by Cytherean society that she lost herself inside it. In one version I even had her trying to join Cytherean society and leave Earth behind forever.

And even as I write it down now I see how stupid it sounds. That's just not Isra. Cytherea appeals to one's basest instincts and though she demonstrated that she does, on occasion, indulge those instincts. But she's got a bit of Spock in her, not to mention a will one could bend a horseshoe around. Isra is just not susceptible to this kind of obvious manipulation and I don't know why I thought she might be.

But Isra is susceptible to Isra. So I wrote it so Isra was following her pride and creating more trouble than she was solving; burning down the house to kill a spider.

And then I came to this point. Where Viekko and Althea fell right into the Rainha's hands and attacked just as she planned to and Isabel reveals that everything, even the Corsario, are working according to some master plan she has for all of Cytherea. Isra was there but she was just kind of there. Hanging out with the Rainha while she watched her entire team get decimated.  This moment needed... something. A disaster. Something that would make it clear, in no uncertain terms that Isra Dun Fucked Up.

Having people blinded with hot pokers as the ultimate Cytherean punishment was a factor early in the book but mostly as a way to show the horrible brutality of Isabel's regime. But it was a minor thing. Just one more object on the pile of atrocities that the Rainha racked up.

And then, one morning, it came together and I realized the disaster I needed was right in front of my face. I thought it was a bit extreme when I wrote it but, looking at it now it fits. Every once in a while I'll be reading a book and I get to the spot where something terrible is supposed to happen. And then, through the pages, I can almost see the author quickly fixing things so that the terrible thing didn't have to happen. I always hate that. I feel that an author shouldn't be afraid to 'go there' if the situation calls for it.

Welp, this is me 'going there'.

It was either that or kill her off and you probably shouldn't tempt me. 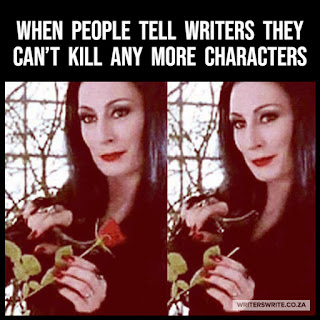