Sometimes You Need A Filler Chapter

Okay, not filler, exactly. There are some elements that I wanted to add to give the reader a better sense of what is happening on a larger scale. It was hard to find a specific place to put them so they all got crammed in here with a nifty little conflict and Althea showing that thieve's craftiness at work.

For one, I wanted, of all people, Athea to have a moment to react to Viekko's.... ahem... disappearance.  But it strikes me that, devoid of any tangible evidence, that reaction would be shock and denial. Both valid but not a lot to work with.

"No way it could happen."

Pretty much it. Short of having her run and go look for him (which she can't do) or try to rally the others to figure out what happened (not the best time) she's kinda just stuck looking at a screen in stunned silence. It's a hard thing to make a chapter out of but I think it is important.

But, at the same time things are happening. Rainha Isabel will be wanting to contain this situation and turn it to her advantage as soon as possible.

But, again, it's hard to illustrate that short of a sweeping exposition of soldiers tearing through the city, raiding houses and searching Occulto for any signs that they might be hiding. And, even then, that's pretty much the extent of it. One could probably get a chapter out of that but it's not the direction I wanted to go and not really the feel I like in this series.

This chapter was a pretty late addition to the book, actually it was written during the final draft (as you might sense) but it pulled together those threads I thought were just hanging in the breeze. It doesn't move the story forward as much as it just gives a wider idea of what the story is as we enter the third act.  Which is set to begin, right about now... 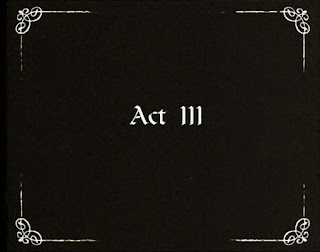