The wacky 80’s Saturday Morning cartoon villains you knew and loved didn’t go away, they just got old.

Tucked away in the Hidden Brook retirement home Max Malice, former head of an army of mutated dog-people, the Muttants, is forming a plan to escape. But to do that he will need his long-lost son, Jayce who, himself, is clinging to the edge of society. He is homeless and living from one day to the next, but his life changes when one of his father’s henchmen makes an attempt on his life. 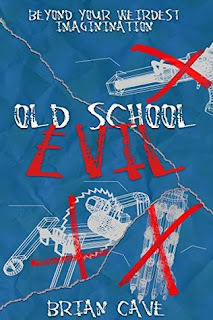 1. As Over The Top As The Cartoons That Inspired It:
This was such a fun idea and the author nailed it. This book is an homage to the goofy action/ adventure cartoons from the '80s. And from the punny superteam names (i.e. Muttants and Hurricanines), on-the-nose alliterative villains (Max Malice) not to mention lasers and mutants shooting out of every corner of every room, Cave managed to capture the quirky traits that defined this genre and put them all together for one hell of a ride.

2. How To Survive A 80's Cartoon:
While I was reading this, the book 'How To Survive a Horror Movie' came to mind. This book isn't a straightforward genre manual, but the narrative had a similar feel. Jayce, a homeless man with a dark past and a love for old cartoons wakes up one day to find himself inside said cartoons. The Scream series comes to mind as well as Jayce has to learn the 'rules' to survive and '80's cartoon.

3. The Machinations of Evil... From Hidden Brook:
The story is also told (as is often done in the genre) from the villains point of view and in almost a stark contrast. Max Malice finds himself trapped in the everyday world. Yes he is surrounded by fellow supervillains but they slowly wile away their remaining years while Malice still has World Conquest on his mind. And the two storylines play extremely well with each other.

4. Wait... What Was Happening?:
The one thing I did notice is that, to a certain extent, the genre itself is driving the plot. Here and there, I felt like the book lost its way, the characters were just reacting, and events in the book were driven forward in order to get to the next awesome genre reference. It wasn't a major problem but it did poke out along the edges sometimes.

Although given how loose the plots of these cartoons were, maybe that, in and of itself, is a brilliant reference.

5. You Had To Be There:
As a child of the '80's I have fond memories of waking up early on a Saturday to run downstairs, flip on the television and eat sugar cereal in my pajamas while marinating my brain on those cartoons. I remember loving Thundercats (which I rewatched fairly recently and, I've gotta say, it holds up amazingly well) and He-Man. She-Ra was for girls but it was also a guilty pleasure of mine. To this day, one of my personal catch phrases is a variation of, "Well now I know. And knowing is half the battle. Go Joe!"

I guess what I am saying is that I'm familiar with the conventions of this genre.

That being said, while the story is fun and gripping, I'm not sure it holds up by itself. It would be interesting to know how someone who never really had that experience would react to this book. I have the feeling they would shrug and say, "Yeah, I don't get it."

This book probably has my favorite ending of any book this year. Obviously don't want to spoil it other than to say the author's explanation for the world he created and the world of '80's cartoons in general... it makes me smile just thinking about it.


7. The Verdict ⭐⭐⭐⭐⭐
Again, I feel like someone who didn't grow up in the '80s or '90's on these cartoons might feel like their missing something but, since those kids are now (mostly) adults, its the perfect time and place for this book.

And the references aren't so obscure that a person who was only tangentially aware of these would probably have just enough knowledge to enjoy this. Overall a fun little action/adventure that will leave you wanting to scroll through Netflix to find some old friends.