10 Things About The Blue Crucible

During the height of the George Floyd and BLM protests when Minneapolis and other cities were burning and for the first time, in my lifetime, people were starting to have a real conversation about what the role of policing should be in our society, a book brandishing mounted police officers bravely charging into some kind of pitched battle caught me eye.  It seemed strange now, like it belonged to some forgotten, more innnocent time. Maybe it does. So I picked it up.


After a corporate nuclear war, a group of police officers from all over the world find themselves in Colombia, Missouri. Will the world collapsing around them they are the last chance for law and order in the This Fallen World? 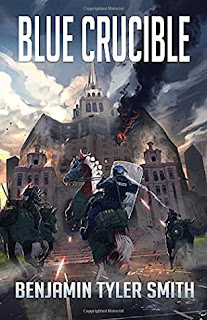 I saw the cover on social media and had to know. Keeping in mind that the author would have been writing this for probably a year, most likely years, before now I found it intriguing and wanted to know what it was like to try and sell a book like this right now. So I picked up the book and reached out to the author to see if he wanted to talk to me.

He never responded which... yeah that makes sense. If I wrote a hero cop book I don't think I'd be rushing to talk to every rando who sent me a message right now. But I really was interested in what it was like marketing this book right now, what his views were and how they may have changed.

That said, the offer is still on the table if you're reading this.

2. Reflections of Society in Literature:

That said... there's not much to say. The book is very simplistic. It follows a group of cops. They are heroes (YAAAY!) They fight the corporations. They are evil. (BOOOO!)  Although they apparently work for them, so that's a thing (YA.... wait what?) But they turn on them for no discernible reason and lead a military attack against the most powerful force in this Fallen World! (huh?)

They are perfect 2D characters. None really stand out, they are all fairly interchangeable. They fight for Truth and Justice in this Fallen World!

4. Okay... let's talk about the Corporations:

They are perfect 2D villains. They nuked the entire planet for no discernible reason. They are greedy and evil and care nothing but themselves in this Fallen World

5. What's with the 'Fallen World' thing?

Couldn't tell you. Every chapter ends with this over-dramatic tag. It felt like the author was desperately trying to force some amount of tension and drama in a story that was clearly lacking both. Don't know if this is a feature in the series (this is apparently book 7 in the Fallen World series but the first by the author... so figure that out) or if this is a flair of this particular writer but it didn't work for me. In fact it was incredibly annoying.

6. Reflections of Ruins of Empire in literature:

I did see something in my own work. Some of the feedback I've gotten from Saturnius Mons is the fact that the battles are long and tedious and over-described. In trying to create this action-filled sequence I, instead, strangely manage to be boring. And reading a something that almost reads like the screenplay of an action movie... I sorta get it. At several points my eyes glazed over and I had to go back to remind myself who was even fighting and why.

7. One Thing About The Police:

There's really nothing of any depth anywhere in this book but if there is one thing we can take away from it, it is this. The group of cops defending Colombia, MO are painted as these super-human figures with a fanatical devotion to duty and an almost Dudley Do-Right grasp on morality.

That's not how cops work. That's not how humans work. And if that's what people expect from the men and women who serve in that role... well it's no wonder they are failing so miserably.

Since I opened the door on this, I might as well throw out my view as to what's going on with this issue. I think there are good men and women who do their best to carry out an impossible and largely thankless job. I also think policing holds a special attraction for those who crave authority and power and especially to those prone to abuse both. I think the entire system is rotten all the way to the core and has been exacerbated by our law and order fetish for the past forty years or so. Furthermore, I believe that is pretty clear that a lot of policing policy and tactics were developed as a kind of racist retaliation against the progress of civil rights over the past hundred plus years. And I think there is merit to the idea that we have looked to law enforcement to cure too many of societies ills and money would be better spent on social systems designed to address the cause rather than put more people behind bars.

And, overall, I think that what we are seeing is the final collapse of systems that were non-functional from the get-go, have become obsolete or have been stripped down and sold off to the highest bidder. Voters and politicians have been fairly happy to ignore these cracks for decades now and finally, in 2020 a storm has come that is going to blow the whole crumbling building to the ground.

The book... right. It's fine. It's simplistic but fans of post-apocalyptic action novels might get a kick out of it.

10. The Verdict ⭐⭐⭐
Maybe I just couldn't get into it. Maybe it's because I bought it hoping for deeper insight to our modern world, but it felt like the plot was leading the story by the nose. None of the characters had any motivation or agency. The story line was very liner pausing at the occasional cliffhanger and careening toward a predictable ending.