7 Things About Legacy of the Unborn

A respected physician has gone missing while a deranged killer terrorizes Manhattan with Jack the Ripper style murders. A gung-ho reporter for a gossip rag, a disillusioned cop and a world-weary doctor bored with his clientele of rich old women all embark on a journey to discover the truth. But at the heart of it all is an ancient secret that destroys everyone that gets close to it. 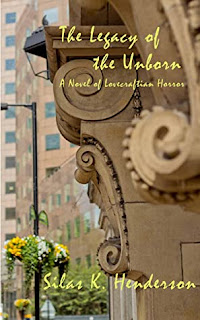 1. My Qualifications (Or Lack Thereof)

Legacy of the Unborn was written as a sequel to Lovecraft's At the Mountains of Madness. Which is a book I have not read. In fact, I have only a loose knowledge of Lovecraft and the Cthulhu Mythos. I think I might have read one of his short stories at some point in high school or college but the fact that I'm not entirely sure should say something about the potential impact that Lovecraft has had on my life. So keep that in mind.

2. A Journey Into The Unknown

One of the things I was most worried about as I opened this book was that I would just be completely lost trying to get through a sequel of a book that takes place in a universe I had little experience with. But the story stands up all by itself. Less a horror and more a mystery with two teams trying to put together clues surrounding a missing doctor and a Ripper right in Manhattan.

The story is set in a 1930's New York and book did a lot of good work putting me there. The language, the speakeasy culture, the overall feel of the city gave the book a film noir feel. I could almost hear the lonely saxophone track as the characters made their way through the old brownstones and rain-slicked streets. The dialog is peppered with the affectations of the era especially when it comes to the reporter which crept right up to, but not past, the point of being annoying.

One of the things that I had trouble with was the romance between the reporter and the cop. It feels a little forced. I get that two people can suddenly and unexpectedly find themselves swept away in romance, and that's what the author tried to portray but, I didn't buy it. The emotion wasn't there. I almost felt as if the characters were saying, 'Our fate in this book will be more powerful if we are deeply in love so lets be deeply in love now. Because the plot demands it. Smooches!'

Yeah it didn't work for me.

I struggled a little bit at about the 50% marker as the plot does seem to stall out for a moment. The characters chase their tails and the narrative gets lost before it finds the right track again and we are off. However, I feel like I ran into that same feeling that time I may (or may not) have read Lovecraft. It feels on brand, is what I am saying. It could be a feature rather than a bug.

Maybe a fan of Lovecraft can confirm or deny this for me sometime.

6. Do We Talk About The Cover?

When it comes to indie books, I don't usually bring up the cover. It is what it is. It's often the best an author with few resources can put together so I try not to judge. Or maybe its out of self defense. However when I talk about the book to people and they get a certain look in their face when I pull up the cover, its worth talking about.

It's pretty bad. Especially considering what is inside is well written, well thought out and well executed. I guess what I am saying is this is a good time to adhere to the maxim 'Don't Judge a Book By It's Cover.'

It was fun. I feel like I got as near to a Lovecraftian experience without... you know... actually reading Lovecraft which, yeah maybe I should do. But in my, as yet, completely uneducated opinion, it gets close. Or, if you, like me, have not ventured into that world, this is just a nice, creepy mystery