Why I am Voting For Joe Biden

This is, without a doubt, the most dangerous election I’ve ever lived through. I would go so far as to say this is the most dangerous election in the nation’s history. For the first time we have a president who is casting doubt about whether or not he will accept the results of the election. He has said time and time again that if he doesn’t win, then it’s rigged. He’s telling his base that anything less than absolute victory means that the election was stolen by those who will destroy the country.

We have a president flirting with civil war. His people have come out advocating martial law if the election goes against him. Not only that he has openly and unashamedly tried to shut down avenues of voting. The Republican party, who’s only platform now is what comes out of their mad dictator’s face, has taken a position against democracy.

And I completely reject arguments used to shame those who vote third party or independent candidates. Especially arguments along the lines of, “You are stealing votes away from [insert preferred candidate here]”

They speak as if my vote is somehow the property of the two major parties. It’s not. It’s my vote. It’s the one tiny thing I can do every year to register my discontent at a system where the rich and the corporations get to decide what choices I even get at the polls. We don’t even get a real choice most of the time. The big donors get to come out, pick the candidates who best serve their interests and then we get to decide from them.

That’s why we’ve often got the lesser of two evils time and time again. I long since gave up on that idea that the Republicans or Democrats would ever produce a leader that would serve the interest of the people.  And during any other year I would be perfectly happy handing the election to a party in opposition to my ideals in order to say, in some small way, “You don’t represent me either! You swing by, make a lot of promises and go back and work for your big money donors. And until I believe you actually work for the people, you will not get my vote and I don’t care who is on the other side of the ballot because they are doing the same thing!”

So, whenever I can avoid it, I don’t vote for anyone from the two major parties, but I’m making an exception this year.

This year I’m voting for Joe Biden and every candidate running against a Republican, Democrat or otherwise.

It’s still the lesser of two evils but, on one side the evil is threatening the very structure of our nation. Ideals that should transcend partisan politics. Ideals like a free and open society, honest and fair elections and and Liberty and Justice For All.

I live in Idaho which is hardly a swing state. It’s a forgone conclusion that, unless something really weird happens, (although if any year is the year for something really weird…) this state is going Trump. But my hope is that my vote is just one of thousands that makes that margin a lot slimmer than the Republicans expected. I want my voice to be one of many that makes the party who’ve enabled this abomination sweat a little.

But that’s my vote. If you’re looking at these two candidates with disgust, I can hardly blame you or anyone else for looking for a third option.

It’s yours. It doesn’t belong to anyone and you sure as hell don’t owe it to anyone.

I will say this, if you are reading these words and planning to vote for Trump, please take a moment and consider the abuses of power over the last four years. The tearing down of institutions that don’t slavishly cater to his every whim. The obvious authoritarian tendencies. Especially consider how you would feel if someone in power that stood for everything you hate came out and said he might not step down if he loses.

“I will totally accept the results of this great and historic presidential election if I win.”

“Get rid of the ballots and you’ll have a peaceful—there won’t be a transfer, frankly. There’ll be a continuation.”

These are words recorded from Trump’s own mouth. Imagine if they came from Obama. Or Biden. Imagine the outrage you would feel and why. If it would not be okay for a Democrat to throw chum in the water to add confusion to an election, why do you feel it’s okay if he does it?!?

Do you really think it’s okay for someone to stoke division and undermine the election just because you like the other things he’s doing?

Even when asked point blank during the debate whether he would accept the results of this election all he could do is go off on a tangent about ‘poll watchers’. Leaving his followers to interpret that… however they want to.

And to my friends who not only support this president but cheer this flagrant disregard for democracy then you better hope this is the last election we ever have. Because, otherwise, some day, someone that you hate might get into power. That person could use the very same tactics the Trump has normalized, tear down the same checks and balances and rally their followers in exactly the same fashion to finally do what Trump will, hopefully, fail at doing.

And if you hope that this is the last election we ever have, then I suggest you take down that American flag in front of your house.

Because I can’t think of anything less American than a dictator.

We don’t have kings. We kick them out.

That flag you claim to respect stands for a government ‘Of The People, By The People And For The People.’

Which, when you think of it, is a rather radical leftist ideal. Especially when compared to the statements of our current president. 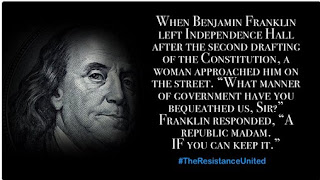