9 Things About The Pacifists

In the middle of a war between the Kadrafian Mining Corporation and the Galactic Naval Corporation, a disillusioned fighter ace from a peaceful race of people decides to desert but ends up finding himself trapped on a dangerous planet with a member of the opposing army.

Working together to survive they realize the destruction and misery this pointless war causes. Together the two form the Pacifists, a rag-tag group of misfits committed to ending the war and saving the galaxy and having a bit of fun while they do it. 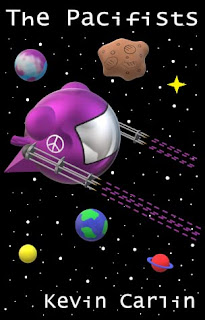 1. An Action Comedy For Our Times:

The overall feel of the book is a space adventure that doesn't take itself too seriously. It revels in the absurdity that bleeds over from our modern world. As much political satire of our modern world as a story about the distant future.

A main theme of the book is obviously the pointless destruction of warfare. Particularly when waged by soulless corporate entities who use it as a revenue stream. But  commentary about race and political divisions, climate change and religion pop up as well.  Some more subtly than others.

I share your concern but relax. I feel like the satire is well-placed. Less taking a position and more just holding up the issues and saying, 'This is dumb, right? We're pretty smart... we're kinda... okay we have our moments. But we should be able to solve this, right?'

If this book has a central message it's that we are all human. Whether on this world or the rather vast, madcap world that the author created in this book. It's both comforting and scary. And, particularly when illustrated in his world, kinda funny.

5. Human's Of A Different Species:

One of the things I did like most about the world were the different humanoid species that sort of branched off our of our society. There's the perpetually child-like 'Z's, the Lumanos a race of androgynous monks,  actual Sheeple and others. And, like most of the book, the different species reflect less about where we are going then where we are.  It's like a more extreme version of the cliques and tribes we've created in this world.

Something that this book strives to remind us despite our differences be they cultural or physical. We are all in this together. And our only real enemy is those who would divide us based on that.

7. A reminder That Writing Humor Is Hard:

The Pacifists is fun, light-hearted and meant to be funny in Terry Pratchett or Douglas Adams vein. But, for me, the humor fell flat. Either the observations were too on the nose, or the situations were just too silly. I could see what the author was trying to point out and, occasionally, he got a smile or chuckle from me but, for the most part, the jokes just didn't land.

But as someone who's attempted to write humor before, I am reminded how hard it is. So respect for going for it.

8. Your Milage May Vary:

Also that's me. I might be a grumpy curmudgeon. The book is well-written enough that its worth a look to see if it tickles you the right way.

I enjoyed it. I would recommend it for someone looking for something light and fun. Someone who likes a bit of political commentary but without the confrontational nature of recent discourse.  The sci-fi elements are kinda cool but I think it would find more traction in a general audience