Wooo! Here we go! Part two of three in my top 15 reads of 2020 as reviewed by Althea Fallon. She is, of course, the medical officer in the Ruins of Empire series. The opinions expressed by Althea do not necessarily represent those of Jeremy L. Jones or Saga of Insanity.  On the other hand we turned Viekko Spade loose on this project last year so this year has got to go smoother.

Hello again. Hope you are comfortable with something warm close by. Be it a hot beverage or just someone special. We're into Jeremy's top ten books this year so let's not stand on ceremony, right? 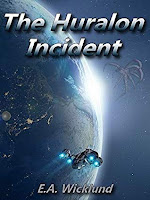 #10 The Huralon Incident
To be honest, wasn’t as fan of this one.

The intricacies of military conflict just don’t interest me. I’ve run into a certain type of people at parties and dinners other unpleasant gatherings. You've met them as well, I'm sure. They exist throughout all of human history and they don't change. Armchair generals, I call them. They are people that can describe, in great, exhausting detail, the Crimean battle of 1670…whatever, along with a detailed analysis of the tactics. Not to mention their belief that field commander Herman Stinkypants was a right pudding head.

I feel like one of those people wrote this book. To the author’s credit, his work almost didn’t feel like fiction to me. The way the author describes the tactics and the equipment and the political movements, made me think, from time to time, that this could very well be historical document. Except for the interstellar travel of course. A thousand years after this book was written and we still haven't managed that.

That was also the problem. It was too realpolitik. The world that the author unfolds is quite in depth and there is a lot to be said about the message it carries. In fact there is a lot of cross-over between this and the book, The Pacifists, that I talked about last time. If it were me, I’d switch the places of these two on the list. The Huralon incident is quite good but not as fun.

Jeremy's Review of the Huralon Incident

#9. Love All The People
This is a book written by a philosopher or a comedian or some combination of the two in the late 20th century? A foul, corrosive mind that was, oddly interspersed with great beauty and incite. I don’t believe I’ve run across a book that will make a lurid penis joke one moment before some grand and insightful claim about the nature of reality… before reverting back to a fart joke. It feels like what would happen if some mad scientist gave Viekko the brain of a scholar or orator.

I had mixed feelings. On one side the book is annoyingly repetitive. It would seem that they reprint live performances he did and the performer did the same speeches over and over. I could have done with less of that.

I suppose I am missing something. It seems like this man was the voice of a specific time and place now long lost. I wonder how many people like him have existed throughout all of human history, how many of their words have been lost forever and whether or not we are better or worse for it.

Jeremy’s Review of Love All The People. You just don’t understand the Prophet, Althea. But you are right, it’s repetitive as fuck.

Jeremy had to bring me up to speed a bit to understand this book. It took a little while but after a few chapters I really found myself getting into it. It was like an up close personal account of an ancient civil war. When you read about history, everything is so dry. The personalities, with the exception of a few, feel like cardboard cut-outs of humanity. But this book, though the events, places and people are all fictional make one realize that those who lived through ancient history were… well alive, weren’t they?

And the story is thrilling and and the same time brutal and chilling. It’s a bit like war itself I guess. There’s the glory and the honor but underneath unimaginable pain and cruelty and this book balances them out. There are no heroes in these pages only those who fight for slightly more honorable ends. And that’s debatable as well.

The ending was tough to get through. I’ll spare you the details but the next time I attend a wedding its going to make me a touch nervous.

Jeremy's Review of A Storm of Swords

#7 The Professor and The Madman
And speaking of history, interesting to see a non-fiction book in the mix.

It makes you wonder about the how a lot of things came together. I’m sipping tea out of mug as I write this. It’s got a rather clever piece of art on. It’s a simple cartoon that changes as the mug cools. So, as you go from hot to cold, you see a rather witty tale unfold. But now that I look at it I realize that there must be a whole story behind this simple object. Never mind the design, just think of the development of the temperature sensitive materials.  I am curious as to what those people would think if they knew their invention was used for such a trivial purpose.

Come to think of it, what about the tea itself? Its foroncha, an herb we brought back from Venus. I know the whole story, I was there after all.  But how many people will sip it and even wonder about it's origin? Will anyone bother to write the book tell about how foroncha was the only accomplishment of a rather doomed mission? Will anyone remember us or is the best we can hope for these unsigned gifts to a new generation?

That's what I took away from this book. Sometimes the simplest objects come from the most profound places. It’s a story about a dictionary, of course, but it’s really a story of friendship, love and redemption. And, in the process, the men happened to create the first dictionary to list every known word.

It’s a book that makes you think. And it’s a rather touching story.

Jeremy's Review of The Professor and the Madman

#6 A Feast of Crows
The fourth book from the Song of Ice and Fire and a dismal addition it is at that.

Although, compared to the third book, this part of the story actually stands up better on it’s own. It focuses less on the mad machinations of the leading families and the wars for supremacy of Westros and more focused on those grubbing through the ruins of their wars. In that, the title is actually quite fitting. The stories inside follow characters, both good, evil and everything in between, making a living from the dead and dying.

And, in some ways, there’s more hope in this book than the last. Take the Brianne of Tarth storyline. She pursues a quest given to her by Lady Catelyn of house Stark in the last book, if she is alive. She tasks the headstrong female warrior to find her daughter, Sansa, and return her to safety. And the ferocity and valor she displays during that seemingly futile quest is inspiring. And heartbreaking. There’s a lot of that spirit in this book. A lot of horror as well but that’s to be expected.

And speaking of the worst, just wait to see what's next on the list. Some odd choices coming up but, if you know Jeremy, you are probably used to that by now.